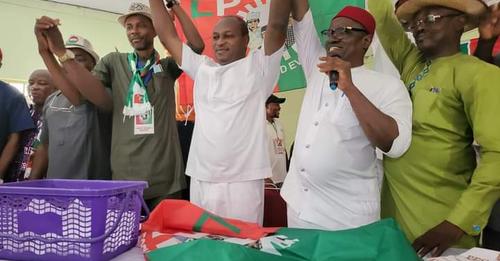 A former governorship aspirant of the Peoples Democratic Party (PDP) in Enugu State, Chijioke Edeoga, has emerged as the governorship candidate of the Labour Party (LP) for the 2023 elections.

PREMIUM TIMES reported that Mr Edeoga dumped the PDP in July and was set to be adopted as the LP governorship candidate in the state later on.

The Chairman of the LP in the state, Casmir Agbo, earlier elected as the party’s governorship flag bearer in the state, had confirmed to this newspaper that he would “withdraw” from the race to give way for Mr Edeoga.

Mr Edeoga, who is a former commissioner for environment in the state, emerged winner of the party’s governorship primary held in Enugu on Thursday.

He was the sole aspirant in the exercise and polled 81 votes.

Eighty-five delegates took part in the primary, which was held after Mr Agbo announced his withdrawal from the governorship race.

The Deputy National Secretary of the party and Chairman, Enugu State Governorship Electoral Committee, Chigozie Ahanudu, declared the result of the primary, according to a report by the Punch.

“By the powers conferred on me as the Chairman of the Enugu State Governorship Electoral Committee, I, Kennedy Chigozie Ahanudu, hereby declare Hon. Chijoke Edeoga, having scored the highest number of votes cast, the winner of the Labour Party Governorship Primary election in Enugu State,” he declared.

Mr Ahanudu explained that although there was only one aspirant, the primary was held to avoid an allegation of imposition of candidates on the delegates.

In his acceptance speech, an elated Mr Edeoga appreciated the party for providing him with the platform to contest the 2023 election.

“I was a founding member of PDP and we are going to help the PDP to dismantle all its structures in Enugu State,” Mr Edeoga added.

Mr Edeoga contested in the PDP governorship primaries, but lost in the exercise after polling nine votes to come second to the eventual winner, Peter Mbah, who polled 790 votes.

The former commissioner was earlier picked by Governor Ifeanyi Ugwuanyi, as his preferred successor.

But the governor, in a last-minute decision, changed his mind, and went for Mr Mbah, barely 24 hours before the PDP governorship election.

The governor’s decision, many believe, resulted in the failure of Mr Edeoga to clinch the ticket despite coming from the Isi-Uzo Council Area, which falls under Enugu East District, where the party had zoned its governorship ticket to.

Mr Edeoga has been agitating for a power shift to the council area on the basis that the area has long been shortchanged in the state’s power-sharing formula.

The agitation had led to the hashtag “Ka Isi Uzo Jee” – meaning Let Isi-Uzo rule. It trended for days on social media before the PDP primary election.

The former PDP member was said to be aggrieved by the governor’s alleged role in his failure at the PDP governorship primary.