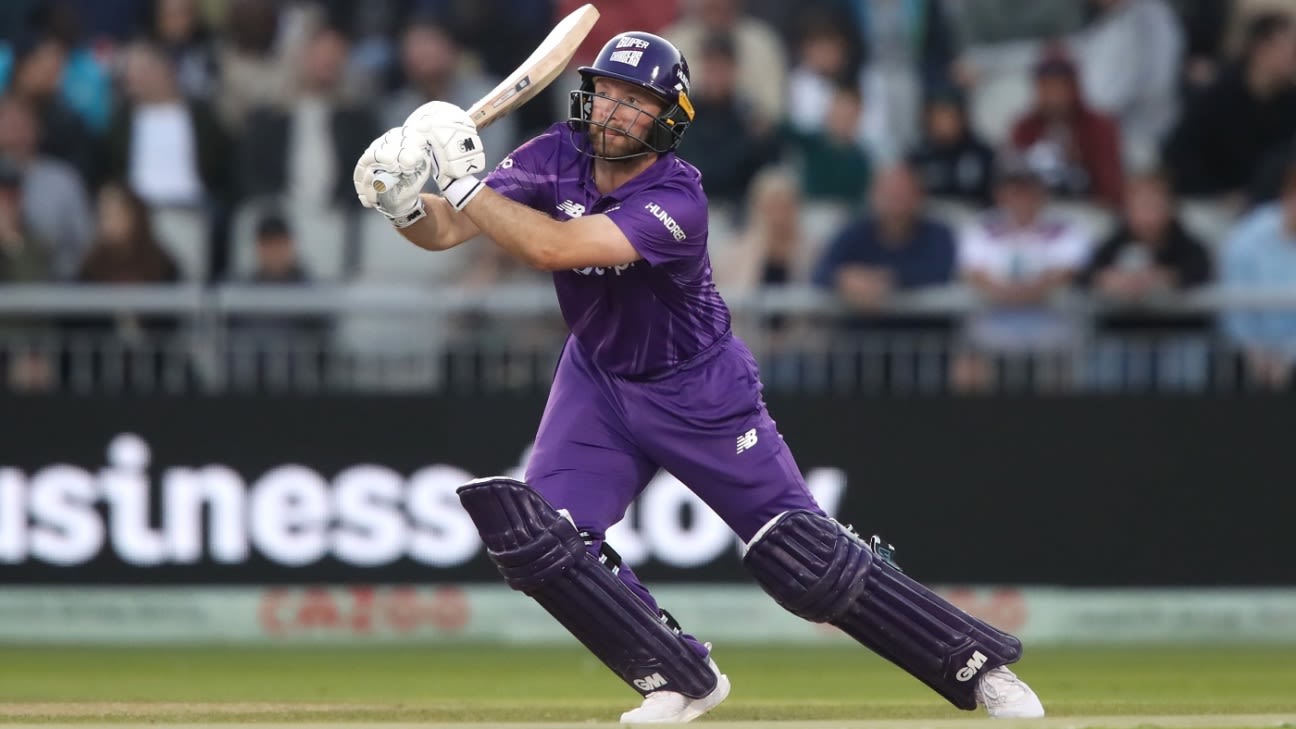 England white-ball captain Jos Buttler’s measured 59 could not stop Manchester Originals from slipping to an enthralling men’s Hundred defeat in the cross-Pennine derby with Northern Superchargers at Emirates Old Trafford.
Buttler scored only his second half-century in 14 innings since replacing Eoin Morgan at the end of June, the top score in a competitive 161 for 4. But that total was reeled in with six wickets in hand and as many balls to spare thanks to opener Adam Lyth’s 51 off 30 and a crucial 33 not out from Harry Brook.
Buttler worked the ball well in a 41-ball innings which showed flashes of brilliance in the opening game for the two rivals. After being inserted, Buttler hit one of eight sixes in a Manchester innings which set off well, slowed and finished with a bang in no small part to fellow superstar Andre Russell’s unbeaten 29.

He hoisted the 50th ball of the innings over wide long-on for six off international colleague Adil Rashid though the legspinner would later get revenge. Buttler shared 84 for the second wicket with Wayne Madsen, who displayed many of his skipper’s inventive qualities – the scoops, ramps and flicks – in 43 off 26.

Buttler and Madsen shared 84 in 53 balls for the second wicket, advancing from 16 for 1 after David Willey’s early strike to get Salt caught at short cover. Willey was the pick of Superchargers’ bowlers with 2 for 24 from his 20 balls, ending Madsen’s stay when he miscued to cover, leaving the home side 100 for 2 after 64 balls.

From there, the Superchargers slowed the rate for a while. Like Willey, Rashid was excellent, going at only a run-a-ball and claiming the big wicket of Buttler, who was bowled having skipped down the pitch.

However, the Originals ended with a bang. Russell and Paul Walter, the latter with 23 off 10, shared 44 in the last 20 balls, hitting three sixes apiece. But it proved not to be enough.

Like Buttler, Lyth only hit one six – pulled over long-leg off Russell, but his innings felt more powerful. His captain Faf du Plessis fell to a superb diving catch from Russell at mid-on off Fred Klaassen, leaving Superchargers at 30 for 1 in 18 balls.

However, opener Lyth got Superchargers ahead of the game. By the time he reached his fifty off 28 balls, the Superchargers were 85 for 2 at the halfway stage, needing 77 more. But he fell two balls later, caught at deep cover off Russell.

The chase was very similar to the first innings in that a good start was made before the run-rate slowed. Like fellow leggie Rashid, Matt Parkinson was outstanding, going at a run-a-ball and not conceding a boundary. However, Willey hit two big sixes in 29, one straight off Russell into the press box window.

When Parkinson had him caught at deep midwicket, the Superchargers needed 35 off 19. But Brook played a key hand, his couple of sixes matched by David Wiese, who hit the winning runs.