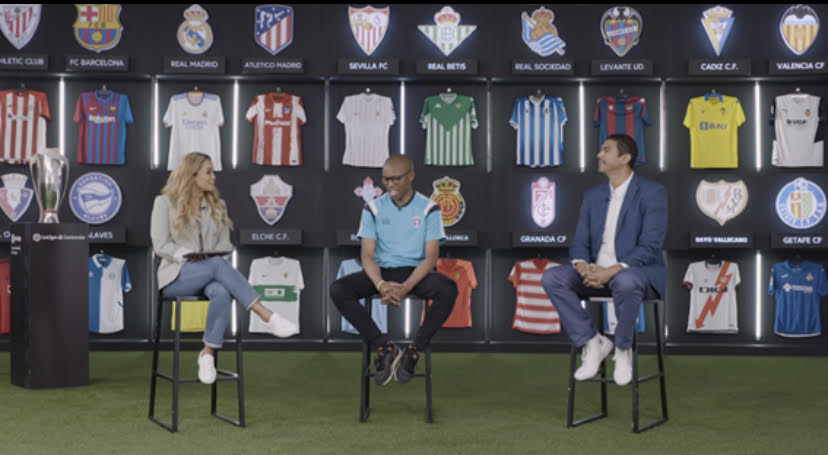 LaLiga this week launches an exciting new cross-platform show, LaLiga Loca, that will celebrate the growth of the Spanish league on the African continent and ensure greater engagement with football fans.

A review and preview show of the best of LaLiga through an African lens, the show is hosted by SuperSport anchor Julia Stuart and will feature legendary players from the African continent who have played in the Spanish league, as well as other prominent guests and a quirky fan segment.

LaLiga Loca will premiere across the African continent this week with former LaLiga and Nigeria Super Eagles icon, Finidi George, a special guest on the first show, which airs on the dedicated LaLiga channel on DStv on SuperSport 4.

It will also be available on LaLiga’s Instagram and Facebook social media platforms, giving African football fans the chance to interact with the league and share their favourite LaLiga highlights and comments while standing to win spot prizes.

“LaLiga’s popularity has grown in leaps and bounds in Africa and we are really looking forward to launching the LaLiga Loca show, which will allow us to have greater direct online engagement and interaction with the continent’s fanatical football fans. It’s an entertaining show that promotes the unique nature of LaLiga, with a particular emphasis on the African interest and involvement in the league, and it is sure to make for popular viewing and provide greater insight into LaLiga for African football fans,” said Marcos Pelegrin, LaLiga Southern Africa Managing Director.

Marc Jury, Chief Executive Officer of SuperSport said: “Many of Africa’s best players have been a major feature of LaLiga and with current stars like Samuel Chukwueze, Franck Kessie and Iddrisu Baba lighting up the league, the launch of LaLiga Loca is the perfect addition. Any show that shines a particular light on the continent’s top performers is to be welcomed and will offer a reminder of the talent that abounds throughout the continent. This is a superb initiative by LaLiga, and we look forward to showcasing LaLiga Loca on our platforms.”

LaLiga Loca features the best of LaLiga news and insights from the African continent, with guests such as former Real Betis and Real Mallorca winger George providing expert first-hand knowledge of the Spanish league.

Finidi George will reflect on being one of LaLiga’s African trailblazers, as well as what makes the league so special and unique, while also sharing his thoughts on the current players and teams to look out for in LaLiga.

Popular broadcaster and podcaster and host of the MKT sports show, Mbulelo Thinta, and experienced sports journalist, Jermaine Craig, provide analysis in the first show of the LaLiga season’s most interesting match-ups and players to look out for, with emphasis on the league’s African stars and the players with a strong connection to the African continent.

A fun aspect of the show will be a fan segment where LaLiga fans compete in a quick-fire quiz to win spot prizes on the show.