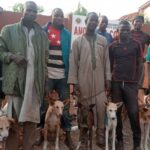 No fewer than 17 middle-aged males from the north of the nation were detained in Ondo State with 35 dogs, charms, and cutlasses.

The northerners who stormed Okititpupa town, headquarters of Okitipupa Local Government Area of the state were arrested after failing to disclose their mission in the state.

Residents of Okitipupa raised the alarm after their arrival in the state because their movement inside the town appeared suspicious.

According to the Commander of Amotekun in the state, Akogun Adetunji Adeleye, the northerners stated that someone invited them to the state whom they did not know.

“They were people who claimed to have come from the northern part of the country with dogs, charms and cutlasses and the people of Okitipupa area who were not comfortable with them raised the alarm.

“But on interrogation, they claimed they were invited to Okutupupa by somebody and that they are actually working for the person. All attempts to reach the person they claimed to work for have not yielded any result till date.

“However, we want to warn residents to be vigilant when they see what I will call mysterious things. We have over 30 dogs among able bodied men who don’t even know where they are going. They claimed they were dropped in Okitipupa by a vehicle and that the vehicle had left.

“Investigation into who brought them and their real mission is still ongoing. They were attempting to enter the forest behind the military barracks in Okitipupa when they were arrested.”