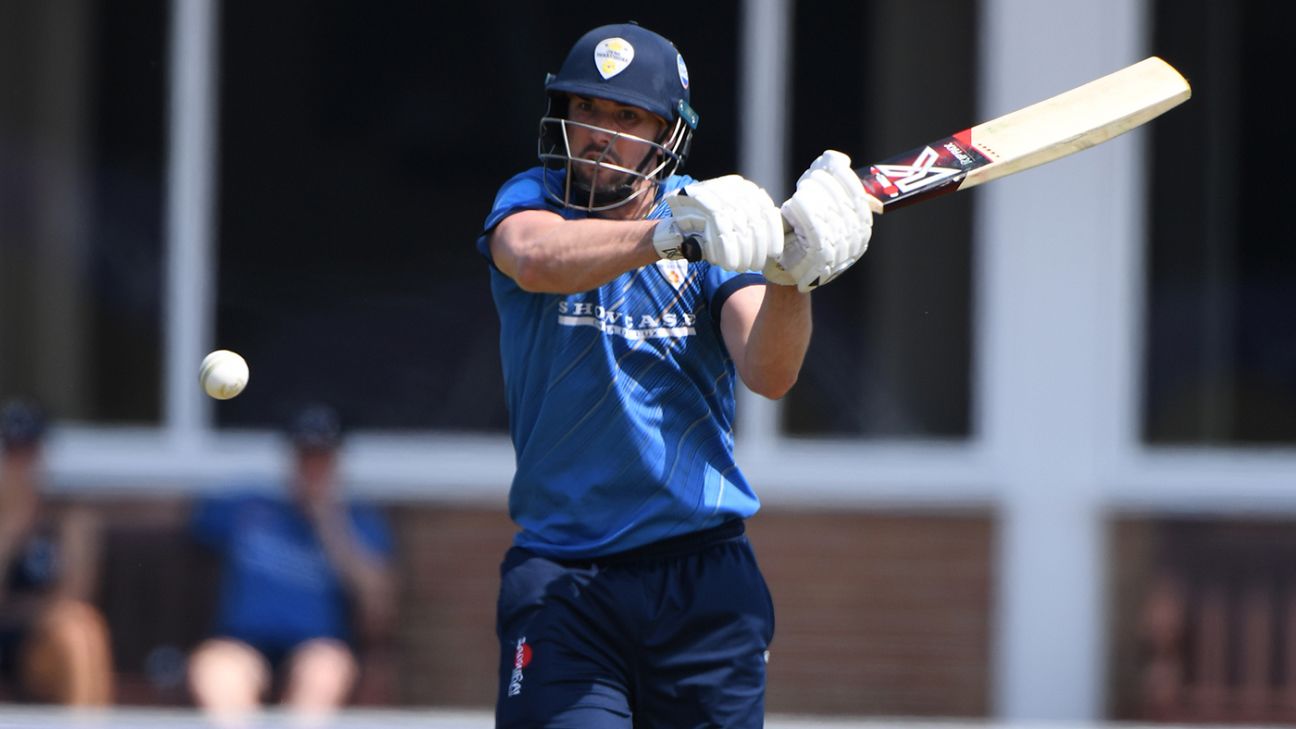 Despite a century for Derbyshire captain Billy Godleman on his return after taking a break from cricket, Leicestershire cruised to a comfortable six-wicket win on the opening day of the Royal London Cup.
Australian left-hander Marcus Harris hit 75, Rishi Patel 70 – a career-best in the 50-over format – and Lewis Hill 51 on his debut as captain as Leicestershire eased home with 24 balls to spare, overhauling Derbyshire’s 275 for 7, in which offspinner Arron Lilley took 3 for 49.
The Foxes’ victory was overshadowed, however, by a serious injury to Nick Welch, their 23-year-old opening batsman, who suffered a dislocated right knee and potential ligament damage in a fall while batting.

The Zimbabwe-born player, who had made 32 from 43 balls with four boundaries in an opening stand of 83 with Patel, lost his footing as he executed an expansive drive against le spinner Mattie McKierman, his right leg appearing to buckle under him.

He was treated on the field for almost 10 minutes before being taken off on a stretcher with the help of St John Ambulance personnel, his dismissal for hit wicket after dislodging the bails as he fell rendered academic as it was clear from the outset that he could not have continued.

Derbyshire also suffered a casualty with wicketkeeper Harvey Hosein unable to field after being hit on the head while batting. With Derbyshire’s squad already badly hit by injuries and illness, coach Ajmal Shahzad had to field in his place, with Brooke Guest taking the gloves.

Godleman, who had taken a month away from cricket to “recharge his batteries” after struggling for form this season, found the break had done exactly what was intended by making 116 from 129 balls with 10 fours and two sixes, his seventh century in what has long been his favourite format.

He was himself struck two glancing blows on the helmet but was thankfully unscathed.

With Guest, Hosein and McKiernan the only other batters in double figures, Derbyshire’s total looked below par on a good batting surface, despite 84 runs coming off the last 10 overs.

They struggled through the middle phase against tight bowling from Chris Wright, Lilley and George Rhodes. Lilley had Guest caught at short fine leg, Fynn Hudson-Prentice at extra cover and picked up his third wicket when Hosein miscued to point.

Despite the return of Ravi Rampaul to the Derbyshire attack for the first time in a competitive match since 2019, Leicestershire made easy progress to 56 without loss from the opening Powerplay – compared with Derbyshire’s 48 for 1.

Ironically, Welch should have been dismissed in the over before his injury when he top-edged a pull off Ben Aitchison but Nils Priestley, one of two Derbyshire players making their senior competitive debuts, spilled the catch.

Leicestershire lost Patel, who hit nine boundaries before chipping Rampaul tamely to cover to be 127 for 2 in the 24th, while Hill fell in the 36th just after reaching his half-century, bowled by a good delivery by Aitchison. Harris hit Aitchison straight to mid-on in the 44th, but after needing 103 from the last 20 overs and 50 off the final 10, the result was never in doubt, Rhodes driving Hudson-Prentice for the winning boundary.