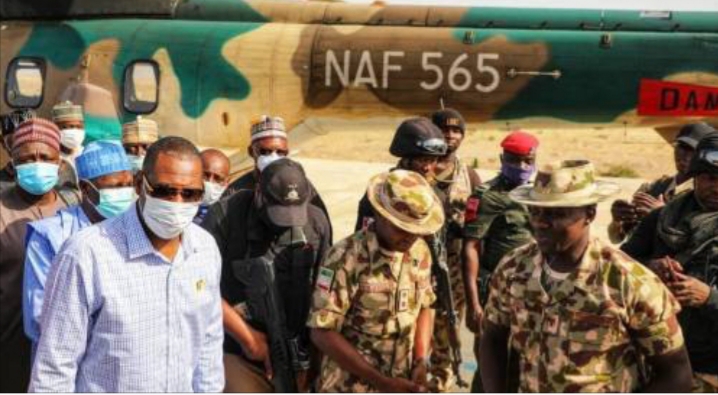 An advance team of Borno state governor, Babagana Zulum was reportedly ambushed by Boko Haram terrorists on Saturday at Ja’alta along Gajiram to Monguno Road.

According to security sources, seven soldiers and members of Civilian-JTF were killed by terrorists.

The insurgents attacked the convoy on their way to Baga in Kukawa Local Government Area as a security detail to Zulum, who is spending two days with other government officials in the town to distribute food items to newly resettled displaced persons.

Sources said the governor had earlier flown by helicopter to the town with some top government officials.

“We were attacked by the gunmen who came with about six trucks and seven motorcycles. We engaged them but they have already destabilised.

“We had no option than to abort the trip and returned back to Maiduguri with corpses of the deceased. About seven people died immediately but two of my colleagues (soldiers) died from gunshot injuries when we got back to Maiduguri,” a soldier attached to the governor disclosed.

In all, nine security men in the advance team were killed in a fierce battle with the terrorists.

This is the third attack on the governor in Baga in three months.

Zulum’s convoy was attacked twice along the Baga Highway in September.

A splinter of Boko Haram sect, the Islamic State of West Africa Province, is believed to have a stronghold in the area.

The decade-long insurgency has killed over 50,000 people and forced over two million from their homes.

Most of the displaced are housed in squalid camps where they are fed by international charities.