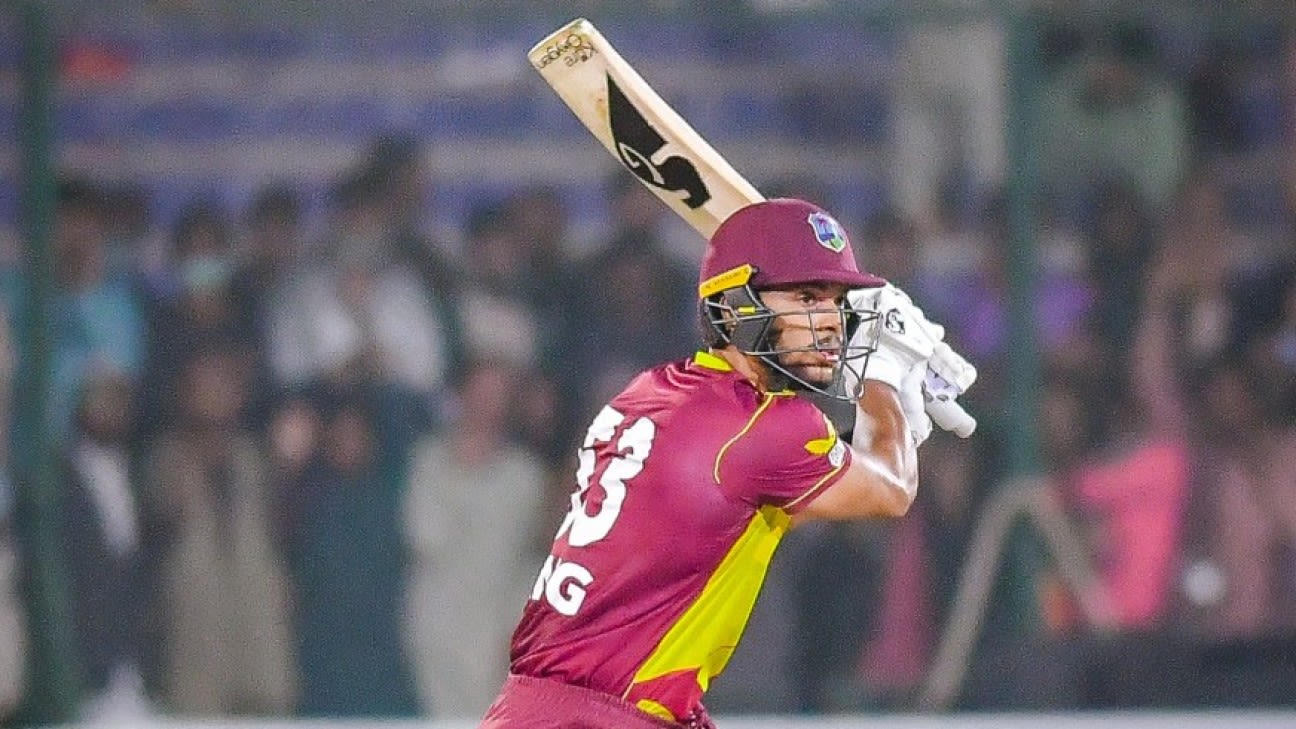 “After I had a good year in 2019 CPL, my white-ball game kind of took over, but I’ll be ready anytime [for Test cricket]”

Brandon King is hoping to make the most of his recall to West Indies’ T20I side after a year away and has his sights set on October’s T20 World Cup in Australia.
King, 27, made an irrepressible case for international selection in the 2019 CPL, when he was the tournament’s leading run-scorer with a strike rate of 148.94 to boot for Guyana Amazon Warriors, but initially struggled to make the step up.

His first 10 T20I innings for West Indies – all away from home – brought just 153 runs and he lost his place after the tour to New Zealand in November 2020, with the selectors returning to the experience of Lendl Simmons and Andre Fletcher ahead of last year’s World Cup in the UAE.

But West Indies’ disastrous performance in that tournament – the defending champions were knocked out in the Super 12s after losing four games out of five – prompted a recall for King ahead of the tour to Pakistan, where he made his maiden international half-century.

King said that he felt more “mentally prepared” for international cricket after taking the time to analyse his own game during his absence from the team, and revealed that he has set himself the goal of leading the run-scoring charts in the five-match T20I series against England in Barbados, which starts on Saturday.

“I was obviously very happy to be back in West Indies colours,” King said. “There’s always been technical aspects that I’ve been working on over the year but I play my best cricket when I keep things simple out there while I’m batting and try to play the situation as it is. That has really helped me to do better out there – just to remain calm in general.

“Over that period of time, I had ample time to reflect on my game and what works for me and what doesn’t, and to try and improve my weaknesses. That was done over time. I feel I was more mentally prepared this second time around, I knew my game better, and I know how to get the best out of myself.

“My long-term goal would obviously be to make the World Cup squad at the end of the year – that’s always in the back of my mind, but I do like to stay in the present. My immediate goal would be to try and do my best in this series here: [in the] last series I played in Pakistan, I finished with the second-most runs so it would be nice to finish with the most runs in this series… that’s my big goal that I’ve set out for myself.

“I try to focus on the things that I can control. Selection and those other aspects, I don’t have any control over, but I’ll always try and put myself in a position to be in the conversation. This year is set up in a way that we have some series leading up to the World Cup and I would love to put myself in a position to be part of a team that starts to turn around the fortunes for West Indies cricket.”

King also confirmed his intentions to play for West Indies across formats, having shown promise in the regional four-day championships before his breakthrough as a white-ball player. While his opportunities to play in the competition this season will be limited by West Indies’ white-ball series, King described Test cricket as “the ultimate goal”.

“I’m definitely willing to play Test cricket,” he said. “When I grew up, I grew up watching Test cricket, so that was what I dreamed of. For me, it’s the ultimate goal. The way my career was going at first was leading towards that, the first West Indies team for me was the ‘A’ team, four-day team after I had a decent four-day championship.

“After I had a good year in 2019 CPL, my white-ball game kind of took over, but I’ll be ready anytime. Any chance I get to play four-day cricket again, I’d love to play to try and put my name in the hat for Test cricket. I’d love to play all formats.”