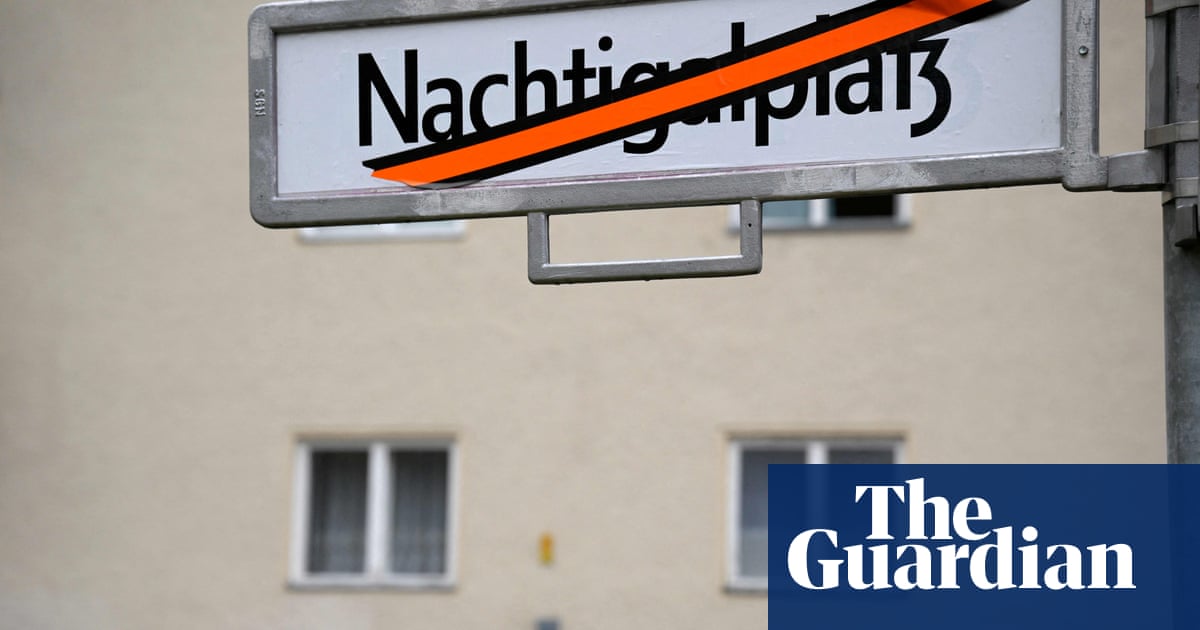 Campaigners who have fought for decades for Germany to confront its colonial past celebrated the renaming of a square and a street in the north-east of Berlin on Friday in tribute to figureheads who resisted forced rule in Africa.

Manga Bell Platz in the so-called African Quarter of Berlin’s Wedding district was renamed in memory of Rudolf and Emily Duala Manga Bell, a king and queen of Duala in Cameroon who fought against German colonialism. Rudolf Duala Manga Bell, who had been educated in Germany, was executed along with about 100 other people by German authorities in August 1914 after a sham trial.

The square, a central part of the African Quarter, had until Friday been known as Nachtigalplatz since 1910, after Gustav Nachtigal, the German empire’s commissioner for west Africa who had a key role in the German colonisation of Togo, Cameroon and Namibia in the 1870s.

Close by, Lüderitz Strasse, named after colonialist Adolf Lüderitz, a Bremen tradesman once celebrated as the founder of the German-Southwest Africa colony – now Namibia – was given the new name Cornelius Fredericks Strasse. Frederiks was a resistance fighter from the Nama people who was imprisoned in a concentration camp on Shark Island along with a group of almost 1,800 people in 1906. He died on 16 February 1907 from malnutrition and hypothermia. Some of the victims among those held with him were decapitated and their skulls sent to Germany for so-called racial scientists to carry out anthropological research on them.

In a ceremony attended by the ambassadors of Cameroon and Namibia, as well as the current King Eboumbou of Douala and his wife.

Jean-Pierre Félix-Eyoum, a great nephew of Manga Bell, paid tribute to his relatives and other resistance fighters who included Emily and many other women, he said.

“This is a big day,” the retired teacher who lives in Munich, said to a large crowd gathered in a corner of the square as residents looked on from their balconies.

“With this renaming, Berlin is recognising its historical responsibility,” he said. He paid tribute to historians, writers, politicians and hundreds of the “Dekoloniale” “decolonialist” movement of campaigners who have spent decades calling for recognition of Germany’s colonial era and for a renaming of the street, square and many other similar locations around Germany.

“I hope that the names of all colonialists still to be found on monuments, streets not only in Germany but across the whole world will one day disappear,” he said.

Seppo Toko, an IT engineer whose family has its roots in the same Douala tribe as Manga Bell, had travelled from Hildesheim in northern Germany to attend the ceremony. He said: “This is a very, very satisfying day for me and it’s an honour to be here. It’s time now for reconciliation between both sides, for some deep dialogue.”

Margo Gorman, a novelist from Donegal in Ireland, and her husband, Hans Georg Rennert, a tour guide who traces the neighbourhood’s colonial era connections, were at the unveiling having followed the renaming campaign for years. “Let’s hope this has something of a ripple effect,” Gorman said. “What’s important is that they also take the locals with them.”

Rennert said there were meanwhile “plenty of other places on the list that now need to follow”, he said. He cited Mohren Strasse (Moor Street) in central Berlin, which is due to be renamed Anton Wilhelm Amo Street after the black philosopher and Nettelbeck Square, also in Wedding, named after Joachim Christian Nettelbeck, a sailor who was involved in the transatlantic slave trade.

The German Empire came to colonisation in the 1870s, relatively late compared to most other powers and had lost control of most territory by the start of the first world war in 1914. Ambitions to secure lost territories lasted until the 1940s, but gained little ground.

But it is seen as responsible for one of the most shameful colonial atrocities ever committed, the genocide from 1904 to 1908 of between 60,000 and 100,000 indigenous Herero and Namaqua people.

Many of its colonisers typically tried to sell their project as a mission to bring Christianity and civilisation to African regions.

Brigitte Huß, who watched as the Manga Platz street plaque was unveiled, said her Baptist beliefs made her acutely aware of the current relevance of the growing movement to recognise Germany’s colonial past. “This is about us as a society recognising and acknowledging that we cannot continue to exploit other people, and the extent to which we’re prepared to make sacrifices to that end. We need to know our history to understand some of the present predicaments we’re in,” she said.

Earlier the district mayor, Stefanie Remlinger said that the renaming of streets was only a fraction of the effort that needed to be put into the examination of Germany’s colonial past. “Street names are ways in which we pay tribute to people and part of our culture of remembrance,” she said. “But it’s only a start. A lot more needs to happen in people’s heads and hearts and in the education system”.

Remlinger acknowledged the resistance some residents had put up to the retitling which she said was often hard for those who had lived on Nachtigalplatz and Lüderitz Strasse for much of their lives. Not least the additional bureaucratic workload which would be required for thousands of residents to now re-register everything from bank accounts to driving licences, she said.

“We will try to make it as easy as possible for these people to do this quickly and easily and ensure they have priority access to the bureaucrats,” she said.

Standing on the sidelines, flanked by police officers, two residents looked on, sometimes shaking their heads.

“No one paid interest in this for years,” said Detlef Skrzypczak who has lived at Nachtigalplatz number 19 since 1977. “As far as most people were concerned it was named after a bird, and didn’t give a thought to colonialists,” he said, in reference to the name Nachtigall which also means nightingale.

Skrzypczak and his girlfriend who lives at number 13, had both been encouraged to put in petitions against the renaming when they’d heard about it several years ago. “But our petitions were turned down and we were each billed €145 each for administrative costs which seemed a bit rich”.

Félix-Eyoum, Manga-Bell’s great nephew, thanked the residents for their willingness to embrace the new name. “I know this is a burden for you,” he said. “But you are doing your bit towards this process of reconciliation”.