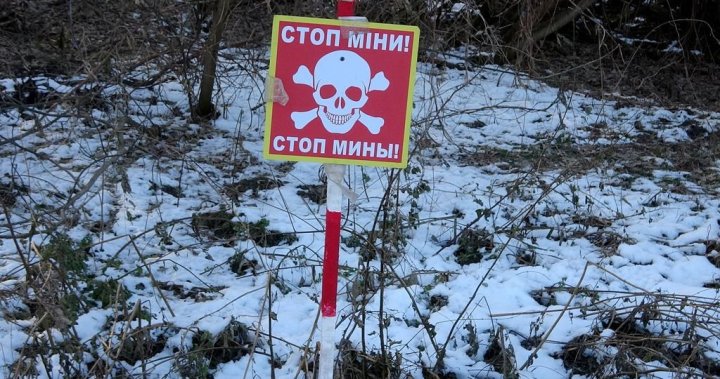 The small yellow stakes in the middle of a vast field outside Kyiv appear harmless, but they are not. Three explosions have rocked this field, including a fatal one that destroyed a military vehicle.

Each stake marks a spot where demining teams have found an anti-tank mine. Russian forces reached the village of Peremoha, about an hour’s drive east of downtown Kyiv, before retreating on March 30, leaving behind fields of anti-tank and anti-personnel mines.

Russia withdrawing forces from towns opposite of Kherson, Ukraine says

The explosive devices served a defensive purpose, but they also prevent the use and occupation of mined land. It is estimated there are millions of buried mines in Ukraine.

The HALO Trust, a non-governmental organization that has received $2 million in funding from the Canadian government, is working metre by metre to clear mines in Peremoha, as well as in Chernihiv and other areas ravaged by the Russian invasion.

On a cold, crystal-clear morning, supervisors walk along a precise route that has been cleared of all mines. Stakes of different colours mark zones that run the length of a trench dug by the Russians at the edge of the village, behind a service station.


Al the work is done by hand and on foot. A first check is done for any sign of small, hidden anti-personnel mines, ready to be triggered by a trip wire. They are cleared before beginning the job of “decontamination” to get rid of anti-tank mines.

To detect anti-tank mines, a team uses a device that resembles a large rectangular frame surrounded by a cable connected to a metal detector. It takes two people to move the frame over the ground, covering a precise area. If the alarm sounds, the spot is investigated with another, more precise detector.

“In the current context, (demining) is probably the job that is most in demand in Ukraine,” said one of the team leaders, Danylo Kudriavtsev, who before the war worked for a glass-making company. “You have to be well prepared psychologically and in good shape to do this work. You have to be very responsible.”

If an anti-tank mine is detected, it has to be delicately unearthed. At that point, the army or other authorities take over the job of detonating or disarming the mine, as that work is not left to an NGO like the HALO Trust.

Ninety-eight per cent of the HALO Trust staff in Ukraine are locals, providing work for more than 600 people in a country where the war has led to high unemployment.


The organization has perfected its methods for identifying minefields, using open-source information and testimonials from citizens. However, the number of minefields is huge, in particular around Kharkiv, a large city in the east recently liberated by Ukrainian forces.

There are mines everywhere where there have been battles, or where fighting continues. Accidents are frequent, sometimes involving children who are intrigued by the metal devices.

HALO has organized 630 events to raise awareness among the public, but even that is not enough.

If someone finds a mine in their yard, they can call Ukrainian emergency services, who will intervene. But to comb over large areas, the HALO Trust takes over from a Ukrainian state apparatus that is stretched thin.

At a rate of a few hundred square metres cleared in a day, the HALO Trust has work for many years to come.