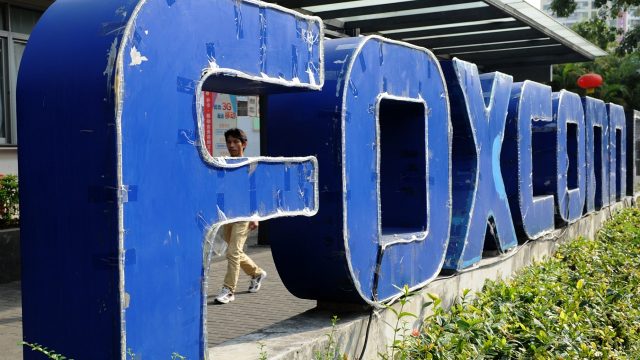 Six million people were on Friday under Covid lockdown in a Chinese city home to the world’s largest iPhone factory, after clashes between police and workers furious over pay.

Authorities have ordered residents of eight districts in Zhengzhou, in the central province of Henan, not to leave the area for the next five days, setting up barriers around “high-risk” apartment buildings and checkpoints to restrict travel.

There have been only a handful of coronavirus cases in the city but under China’s zero-Covid policy even tiny outbreaks can spark gruelling lockdowns, travel restrictions and mass testing.

The lockdown in Zhengzhou follows protests by hundreds of employees over conditions and pay at Foxconn’s vast iPhone factory on the outskirts of the city, with images of fresh rallies emerging Friday.

Footage published on social media and geolocated by AFP showed a large group of people walking down a street in the east of the city, some holding signs.

“So many people,” a man can be heard saying. AFP was unable to verify precisely when the protests took place.

Workers previously told AFP the demonstrations had begun over a dispute over promised bonuses at the factory.

On Friday posts on Chinese short-video apps said the Taiwanese tech giant was turning away many of thousands of people who had answered hiring ads from the firm after a raft of departures last month.

Some who arrived to take up newly vacant posts had been sent to quarantine hotels outside the plant despite in the end being refused a job, multiple workers told AFP.

“We are in a quarantined hotel, and have no way of going to the Foxconn campus,” one worker who asked to remain anonymous said.

Another employee said those turned away had been promised 10,000 yuan in compensation for being forced to quarantine but had received only a fraction of that amount.

“They are not letting us start the job and we cannot return home,” one worker isolated in nearby Ruzhou city told AFP.

He added that there had been multiple small protests in other Henan cities by Foxconn workers made to quarantine and unable to start work.

– ‘Please share this’ –
Other videos posted online on Friday and geolocated by AFP showed angry workers knocking down furniture and swearing at police in the lobby of a hotel in Nanyang city, about 280 kilometres (174 miles) from Zhengzhou.

The workers appeared to have been quarantined in the hotel, with a man heard saying in one clip: “Everyone who’s online, please share this.”

The unrest in Zhengzhou comes against the backdrop of mounting public frustration over the government’s zero-tolerance approach to Covid.

China’s daily caseload stood at 33,000 on Friday — a record for the country of 1.4 billion although small by global standards.

The unrelenting zero-Covid push has sparked sporadic protests and hit productivity in the world’s second-largest economy.

In the southeastern manufacturing hub of Guangzhou, millions of people have been ordered not to leave their homes without a negative virus test.