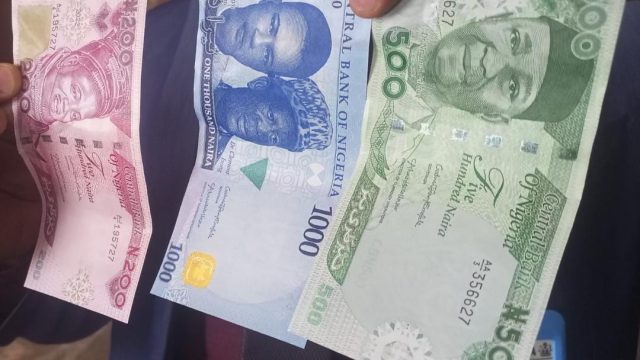 • We Don’t Get New Notes, Say Banks
• We Have Given Waivers To Banks To Take Notes, Says Apex Bank

Nigerians, particularly entrepreneurs, are worried about the failure of banks to roll out new naira notes, few days to the expiration of the deadline set by the Central Bank of Nigeria (CBN).

The Guardian investigation revealed that less than 40 per cent of the banks are currently rolling out the new naira notes through the Automated Teller Machines (ATM) and on the counter.

A visit to some of the commercial banks in Isolo, Lagos, and Ota, Ogun State showed that several customers, particularly business entities, were lodging old naira notes on daily basis.

Surprisingly, some customers who went over the counter for bulk cash withdrawals were disappointed as they were paid with old naira notes.

It was the almost same experience with those who used the ATM machines, as several customers got disappointed, as the machines could not dispense new notes. As a result, they resorted to withdrawing just a token for emergencies.

A few residents in a chat with The Guardian said that they withdrew a few notes since the machines were not dispensing new notes, considering the deadline is fast approaching.

However, sources in some of the banks alleged that CBN did not make enough new notes available to commercial banks to ease the swapping process.

A banker in Lagos State said: “Currently, we don’t have the new note in our branch. Last week, we were given just N1.5m new notes.

“The deadline is fast approaching, but we are not getting the expected quantity. We are suspecting that they will roll it out massively next week because there are no indications that the deadline will be extended.”

Another banker in Ota, Ogun State, said: “We are getting the new notes but in small quantity. What we are getting is not enough to go around. I don’t know what game the CBN is playing, but if truly the deadline is anything to go by, there should be a massive rollout of the money by now.”

Meanwhile, the CBN has insisted that the January 31, 2023 deadline for the old notes is sacrosanct.

CBN Governor, Godwin Emefiele, during a sensitisation tour on the adoption of the newly redesigned naira in Ikeja, Lagos, threatened to sanction banks that failed to pick up the new notes.

He said that the new naira notes were in the apex bank’s vaults awaiting pick up by the commercial banks.

Emefiele, represented at the event by the Director, Legal Services Department, CBN, Kofo Salam-Alada, said: “We have been calling on the banks to approach the CBN across the country to pick up the new notes and we have even waived some of the conditionality for accessing currency notes to accommodate the banks.”

“The banks were being given slots, but now the CBN is bending backward to accommodate the demands of the banks in order to service them so that they can service customers for easy access to the new naira notes,”

He said that the apex bank was currently going around commercial banks to monitor banks and their Automated Teller Machines (ATMs) to ensure that they stopped paying customers the new naira notes over the counter, but through the ATMs.

Emefiele reiterated that the January 31 deadline for the submission of the old naira notes was sacrosanct, urging customers to deposit their old notes and not to be caught unawares.

On his part, the President of the Coalition of Associations in Computer Village, Timmy David, implored the CBN to ensure that the new notes were accessible before the deadline.

He said: “All ATMs should be loaded with the new naira notes. As we are giving the old notes, we should be able to take back new notes. If the machines are not dispensing the new notes, then it will not circulate.”