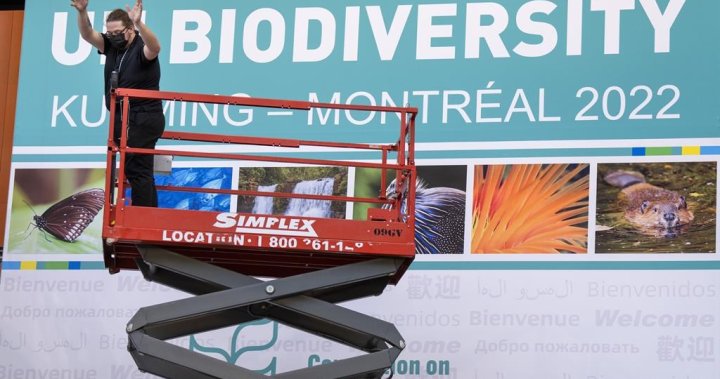 A major international conference on preserving the world’s biodiversity is to open Tuesday with speakers including Prime Minister Justin Trudeau and United Nations Secretary-General Antonio Guterres.

COP15 in Montreal brings together 196 countries to refresh the Convention on Biological Diversity and is seen as a crucial attempt to reach a global deal on saving the world’s ecosystems and the plants and animals that depend on them.

“What we’re looking for is something like an acknowledgment by all countries in the world that we need to have a nature-positive 2030,” MacDonald said. “That means there’s more healthy nature on this planet by 2030 than there is now.”

Diplomats have hammered out 22 targets for the negotiations, which include halting the spread of invasive species and reducing the use of pesticides and plastics.

But the main objective will be to agree on a minimum amount of how much of the world’s ecosystems should be protected and conserved.


Scientists suggest preserving 30 per cent of the globe’s remaining lands and oceans is vital to stop increasing threats of extinction and achieving international targets for reducing greenhouse gases. They say biodiversity and climate change are closely linked.

A 2019 paper in the journal Science concluded: “If current trends in habitat conversion and emissions do not peak by 2030, then it will become impossible to remain below 1.5 (degrees Celsius).”

Federal Environment Minister Steven Guilbeault says Canada has four main goals for the final agreement: meeting the 30 per cent threshold, reversing biodiversity loss by 2030, providing money to developing nations to allow them to meet those targets and ensuring Indigenous people are fully involved.

Guilbeault acknowledges meeting those goals won’t be easy. He said the last draft of the convention he saw contained 1,200 places where the final text hasn’t been agreed on.

The event will create a small city within Montreal for the next two weeks, with 17,000 registered attendees and 900 reporters accredited to cover their deliberations.

The COP15 conference lasts until Dec. 19.