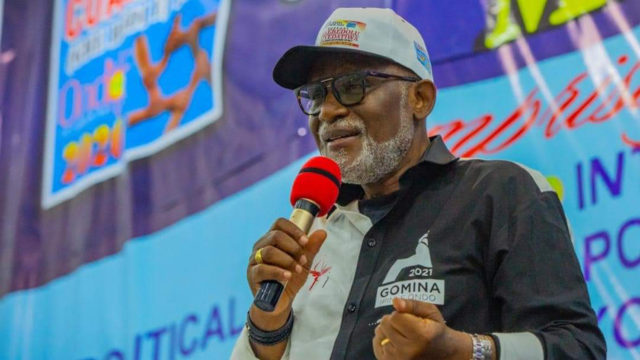 The Federal High Court, Abuja has a dismissed a suit challenging the validity of the primary election that produced Rotimi Akeredolu of Ondo State as the governorship candidate of the All Progressives Congress (APC) in the last gubernatorial election.

Justice Iyang Ekwo in a judgment delivered Wednesday morning, held that the suit instituted by one Olajumoke Anifowose, was statue barred, having been filled outside the 14 days allowed by law for a pre- election matter.

Anifowose in the suit filled through her counsel, Adesina Oke, had challenged the indirect primary election that produced Akeredolu as the nominated governorship candidate of APC.

The plaintiff consequently applied for an order of the court declaring the primary election invalid and to bar Independent National Electoral Commission (INEC) from recognising Akeredolu as a governorship candidate.

She prayed the court to prohibit APC from submitting Akeredolu’s name as the governorship candidate and stop Akeredolu from himself as a gubernatorial candidate.

But the judge rather upheld the preliminary objection against the suit filed by Akeredolu and APC who claimed that the court action was grossly incompetent since it was not filed within the 14 days stipulated by law and as such, the court lacked jurisdiction to entertain the suit.

Justice Ekwo nevertheless observed the fact that Akeredolu was nominated by APC on July 20 and the plaintiff instituted the suit on July 29, 2020, which fell within 14 days stipulated by law, the suit however became incompetent due to the withdrawal of the initial originating summon and its substitution on August 20, 2020, by the plaintiff.

The court held that the substitution of the second originating summon was done outside 14 days required by law, and therefore became an invalid suit by the provision of section 285 of the 1999 Constitution.

“Let me make it clear that a careful perusal of facts in this matter showed that the first defendant, Akeredolu was nominated on July, 20th, 2020, and the plaintiff came to court on July 29, 2020,” the judge said.

“A new dimension however emerged when the plaintiff on August 20, 2020, substituted the originating summon of the July 29, with another one due to the error discovered in the first one that sued the office of the governor that did not participle in the disputed primary.

“This substitution, having not been done withing 14 days allowed by Section 285 of the 1999 Constitution, made this suit statue barred and constitutionally dead.”

Justice Ekwo subsequently dismissed the suit on the ground that it was grossly incompetent to stand in the face of the law.