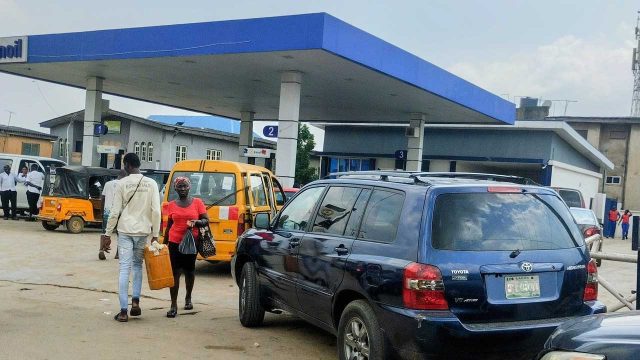 Apparently preparing Nigerians for a full deregulation regime, depot owners and some petrol marketers have again put the nation in another panic mode by hoarding available products in a push to ensure prices are adjusted to meet their operating expenses.

With products hoarded, fuel queues have emerged, forcing many motorists to engage in panic-buying, just as many retail outlets, especially those owned by independent marketers selling above the regulated price.

Long queues were witnessed in many parts of Lagos, yesterday, with the situation apparently worse on Ikorodu road, Maryland, Ikeja, Anthony, Bariga, Ilupeju and Gbagada areas as motorists become agitated after spending hours on queues.

The development left commuters stranded with traffic jams in major areas in Lagos as motorists struggled to get the product. Indeed, only retail stations owned by Major Oil Marketers Association of Nigeria (MOMAN) are dispensing products and selling at regulated price of N170 per litre, while some stations owned by Independent Petroleum Marketers Association of Nigeria (IPMAN) sell between N200 and N210 respectively.

The Guardian had reported marketers’ concerns about the sustainability of the present regulated pump price of petrol. In October, the Chief Executive of the Nigerian Midstream and Downstream Petroleum Regulatory Authority (NMDPRA), Farouk Ahmed, had promised that fuel queues will soon disappear, saying that stakeholders are meeting to find a lasting solution to all the issues that have been raised.

The Authority chief dispelled rumour of stock out, saying, “There is no truth to that at all. Although there may be some issues, unavailability of PMS is certainly not one of them. There is enough that can last more than 20 days. We have agreed that loading of PMS should start immediately and I can confirm that this has started. The queues will disappear in a matter of a few days.”

However, his promises and assertions appear to be far from present realities. In his reaction, the National Operations Controller, Independent Petroleum Marketers Association of Nigeria (IPMAN), Mike Osatuyi blamed the scarcity on the private depots and the increasing difficulty in accessing petroleum products.

Osatuyi said that those that have to sell have had to go the ‘extra mile’ to get supply to their filling stations. He explained that at the moment, most lPMAN members cannot source the commodity because of the supply shortage that has lingered.

Besides, he said getting petrol to members’ filling stations from the depots now costs as much as N200 per litre in some instances. “It is a sad development. Some of my members now pay as much as N200 per litre to buy petrol from the depot, including the cost of transportation and other charges incurred. So in this situation, how much do you think we will sell petrol at the pump?”

He maintained that the fuel situation is not likely to ease unless the government finds a lasting solution to the supply issues and cost.

According to him, one way to address this is the implementation of total deregulation of the downstream sector of the oil industry.

“But the cost implication of the policy will make the price of petrol too expensive for Nigerians, as deregulation will shift the burden from the government to users of the product,” Osatuyi said. He said that payment of subsidy is no longer sustainable, urging Nigerians to face the reality now to avoid the unpalatable experiences that is usually the fallout of scarcity.

A supervisor in one of the MOMAN member-companies, told The Guardian that the company has loaded trucks from its depot, adding that major marketers have products and are selling at the regulated price.

Earlier, the Chairman, Independent Petroleum Marketers Association of Nigeria (IPMAN) Western zone, Dele Tajudeen said there has been an increase in depot price from N148.7 per litre to N178, even as some stakeholders told The Guardian that the Nigerian National Petroleum Company Limited (NNPCL) is starving government-owned depots as well as some marketers from loading, while diverting products to some private depots.

The stakeholders also told The Guardian that the state oil company is heavily indebted to some operators even as logistics challenges are compounding the situation.

Tajudeen stated that none of the Nigerian National Petroleum Company Ltd. (NNPCL) depots have products and the private depots took advantage of the situation to hike the price.

“The only option for our members is to opt for private depots to keep our business moving. We are totally against the increase because it will affect our profit margins and the masses. Some private depots that have products deliberately refuse to sell for reasons best known to them,” he said.

The IPMAN chairman said that the marketers should not be blamed for the increase in pump price, adding “selling at N170 per litre is not realistic”.

Tajudeen said, “Therefore, our members have no other option than to sell between N195 and N200 per litre within Lagos, Ogun and Oyo states, while we will sell between N200 and N210 in Kwara, Ondo, Osun and Ekiti states.

“Most of the tank farm owners have justified this increase because of different charges, among which is vessel charges paid in dollars.

“We are equally calling on the management of the Nigerian National Petroleum Company Ltd. (NNPC) and the Nigerian Midstream and Downstream Petroleum Regulatory Authority (NMDPRA) to investigate the arbitrary increase in fuel price by the private depot owners.”