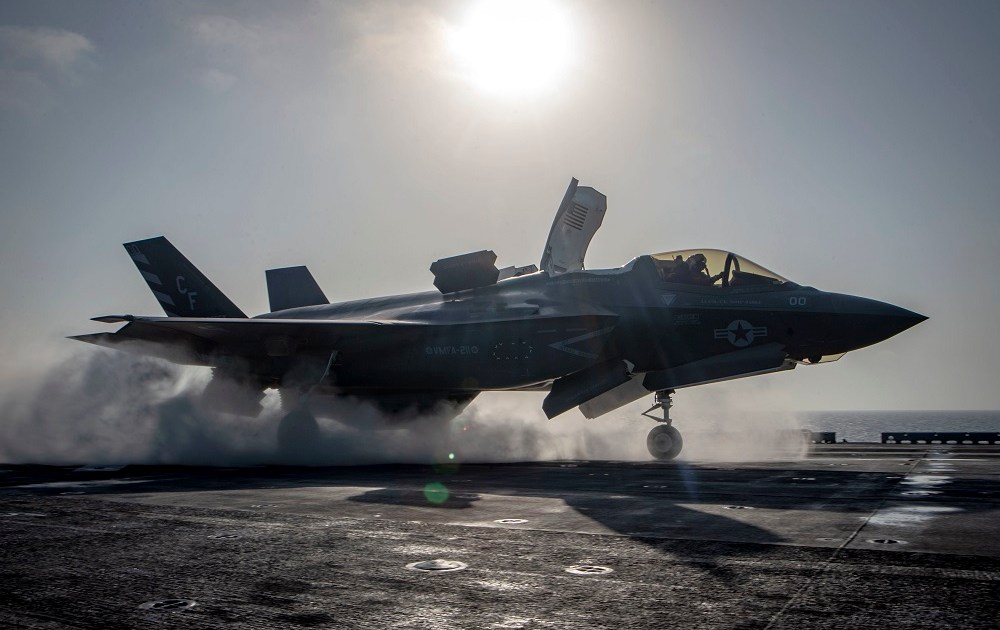 The Pentagon said the US military conducted the air raids against Iran-backed militias at US President Biden’s direction [File: US Navy/Matthew Freeman/EPA]

US President Joe Biden’s authorisation of military air raids in eastern Syria on Thursday has drawn criticism in the Middle East.

The United States military said it carried out measured attacks on facilities in eastern Syria used by Iran-backed militias, in response to rocket attacks against US targets in Iraq.

The air raids were “deliberate” and aimed to “de-escalate the overall situation in both eastern Syria and Iraq”, Pentagon spokesman John Kirby said in a statement.

Some commentators said there was a clear effort to draw a distinction between Biden and his predecessor Donald Trump, who in response to attacks on coalition forces in Iraq used “the most disproportionate force by killing the Iranian general (Qassem) Soleimani”, said Al Jazeera’s Shihab Rattansi in Washington, DC.

Seyyed Mohammad Marandi, a professor of English literature and orientalism at the University of Tehran said the move showed how Biden and Trump are the same.

Biden is the same garbage as Trump.

When the Iraqi Resistance strikes US occupation forces, the US regime murders heroic Iraqi forces far away inside Syria who are battling ISIS.

The US attempts to both strengthen ISIS in Syria & intimidate the people of Iraq.

“The two sides stressed the need of the West to adhere to UN Security Council resolutions regarding Syria,” the Iranian government website Dolat.ir said.

US journalist Ayman Moyeldin drew a timeline to show similarities between Biden’s move and several former US presidents.

The US has long been criticised for military intervention in several Muslim-majority countries such as Iraq and Libya and imposing regime change leading to political chaos and instability.

Days into their Presidency before launching a military operation in the Middle East:

But tell me more about how we can turn a new page in the region?

In the US, the move was also met with condemnation.

Hillary Mann Leverett, CEO of the political risk consultancy Stratega, said while the air raids sent a message about the Biden administration’s loyalties in the region, they would not diffuse the situation in the Middle East.

“The Biden administration is trying to portray this first military attack as measured in consultation with allies. But this won’t de-escalate anything.

“In fact, it signals very strongly a message to Iran that … the Biden administration is in fact trying to increase its pressure and leverage against Iran.”

The rocket attacks on US positions in Iraq were carried out as Washington and Tehran are looking for a way to return to the 2015 nuclear deal abandoned by former US President Trump.

It was not clear how, or whether, the raid might affect US efforts to coax Iran back into a negotiation about both sides resuming compliance with the agreement.

Mary Ellen O’Connell, a professor at Notre Dame Law School, criticised the US attack as a violation of international law.

“The United Nations Charter makes absolutely clear that the use of military force on the territory of a foreign sovereign state is lawful only in response to an armed attack on the defending state for which the target state is responsible,” she said. “None of those elements is met in the Syria strike.”

Justin Amash, a US lawyer who formerly served as the representative for Michigan’s 3rd congressional district said the move was unconstitutional.

These strikes are unconstitutional and dangerous. There’s no general authority for a president to launch airstrikes, and President Biden hasn’t claimed they were necessary to stop an imminent attack. Our Constitution demands he get approval from the representatives of the people. https://t.co/zE21bZQzlk

Still, some observers showed support for the air raids.

Representative Michael McCaul, the top Republican on the House Foreign Affairs Committee, said the attacks were the right move.

“Responses like this are a necessary deterrent and remind Iran, its proxies, and our adversaries around the world that attacks on US interests will not be tolerated,” McCaul said.

Suzanne Maloney, of the Brookings Institution think-tank, said the attacks showed the Biden administration could negotiate with Iran on the nuclear deal while pushing back against the militias it backed.

“Good move by… Biden (administration) demonstrating US can walk and chew gum at the same time,” she said on Twitter.

In the February 15 attack, rockets hit the US military base housed at Erbil International Airport in the Kurdish-run region, killing a non-American contractor and injuring a number of American contractors and a US service member.

Another salvo struck a base hosting US forces north of Baghdad days later, hurting at least one contractor.

Rockets hit Baghdad’s Green Zone on Monday, which houses the US embassy and other diplomatic missions.

Earlier this week, the Kata’ib Hezbollah group, one of the main Iran-aligned Iraqi militia groups, denied any role in the rocket attacks.