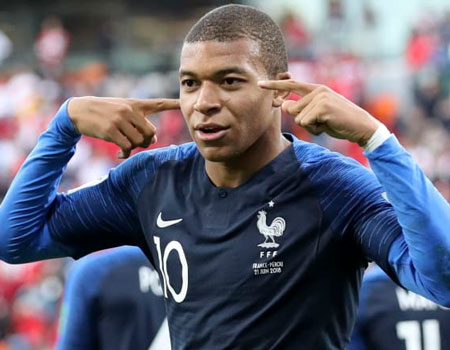 The French Football Football Federation (FFF) have announced they will review their agreement on players’ image rights as quickly as possible after striker Kylian Mbappe refused to take part in sponsor activities.

The Paris Saint-Germain striker and his France teammates are due to stage a team photo and other sponsor activities ahead of the 2022 World Cup at their Clairefontaine training base on Tuesday, but Mbappe said he would not participate — a decision that was supported by senior players in the squad.

Sources have told ESPN that Mbappe wants a say on which sponsors are associated with French players while on international duty — he does not want to endorse some brands, including fast food chains and betting companies, that are under contract with the national team.

“I have decided to not take part in the photo shoot after the French federation’s refusal to change the image rights agreement with the players” Mbappe said in a statement.

“My representatives and I fully regret that no agreement could be reached, as asked, before the World Cup.”

The players told Le Graet and Deschamps they stood in solidarity with Mbappe, sources have told ESPN, and they too want to be consulted around sponsors for the national team so they do not clash with some of their own sponsors. The meeting ended with all parties agreeing a change would be needed, with Mbappe now set to take part in Tuesday’s sponsor activities.

The FFF have since announced they will review the image rights agreement as quickly as possible.

“The federation is delighted to work over a new agreement.”

Mbappe previously took this stance with the FFF. In March, he refused to join his international teammates for sponsor activities and asked the federation’s president, Le Graet, to review the agreement on players’ image rights.

A meeting was held in June between Le Graet and Mbappe’s mother, Fayza Lamari, who was accompanied by his lawyer, Delphine Verheyden, where the matter was discussed. Mbappe’s family and their representatives left the meeting believing a change over the agreement would be made, but it did not materialise until after his protest on Monday.

France, who begin their World Cup title defence in Qatar in November, are scheduled to play Nations League games in this week’s international break against Austria on Thursday and Denmark on Sunday.