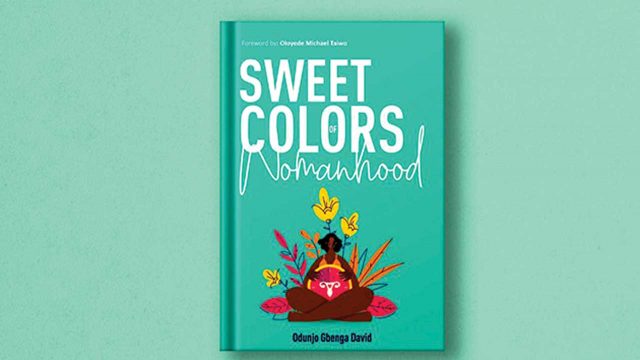 Gbenga Odunjo in Sweet Colours of Womanhood bisects a wide range of topics in his debut collection of poems. The images that stretch out of the collection is quite fascinating; exploring different themes of motherhood and other salient musings about life and existentialism.

In the poem, Capsule of time, which is a very short poem, written in form of a haiku, Odunjo regales his readers with the urgency of time and how it pours without being stopped or hushed or mindful of human indifference to the tick or rock of the hands of the clock or of the numbers winding down or up to herald and reflect the different shades of the day and open readers up to the limit of their stay in this terra firma.

In the poem, Idi Iroko, he writes passionately about a place in the lobe of Mushin fraught with errant children involved in all shades of activities. And their early exposure to the skirmishes of a rotting society and their indiscriminate indulgence in mischievous and criminal endeavours.

The poem questions the role of local government in a state and also the duty of government to render minimum assistance to the less privileged in order for them to get basic necessities of life and prevent the underserved lots from being lured into committing crimes or get riled up in addictive behaviours.

In the poem, Power, the poet writes on of the drunken effect of political power; especially most African leaders, who do not understand the concept of service in leadership. African leaders confuse oppression for leadership and do not really care about feedback from the citizens: all they are attuned to is a reign of terror and a blatant disregard for the principles of the fundamental human rights. Hence, the oppressive inclination of African leaders towards the ruled, upturning the tenets of democracy on which the growth and progress of thriving and humanistic nations are founded upon.

In the poem, Mother, written in haiku form, the persona in the poem, explains the sacrifices of mothers to fend for their children. And how mothers go all the way to ensure that their children succeed on all fronts. The poem, Fourth Tuesday, written in the form of a cinquain, the author scribbles about his personal dealings with not always having anything to say on every fourth Tuesday which is also a jab at bridling one’s tongue in certain moments to probably rethink life or just to put a yoga mat as a wedge on the lobe of our thoughts.

Odunjo writes about the maltreatment of people by a fascist like government and their agencies in his country and highlights the truancy of the law enforcement agencies in the poem, Lekki toll gate, as seen in the lines:
Huddled bodies sprawled on cobblestones
lips frothy with stalks of lampooning
our eyes have become a riverine of sorrow
with shaking hands and trembling calves
these boys & girls have met their maker
but this maker should send them back
back to the beginning
before the violent cork of guns
before the pellets that rid them of breath
this maker should send them back
back before the toll gate was razed
before our rage against their brutality was met with carnage.

Odunjo has given his readers a good collection of poems and we hope he holds forth the same value in his works in the other collections to come. This is definitely a veritable read and should met with a wide embrace.