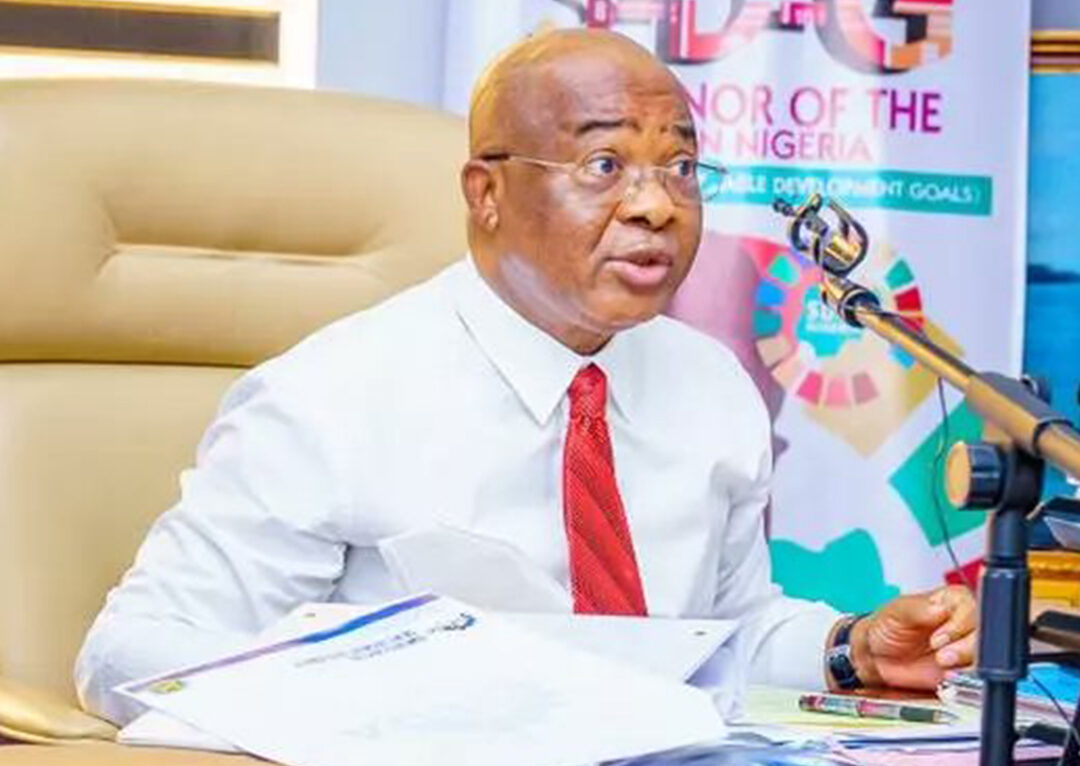 Governor Hope Uzodinma of Imo State has defended the attack on some residents and the burning down of a market in two South-east communities by Nigerian troops.

The troops were said to have invaded the communities at about 4 a.m. with numerous combatant vans, armoured tankers and military helicopters.

Residents said the troops also fired shots and detonated bombs while the helicopters hovered over the communities.

But Mr Uzodinma, while addressing reporters about the incident, on Wednesday, at the Government House, Owerri, claimed that no life was lost in the operation, according to a report by Vanguard newspaper.

However, the governor’s claim was incorrect as PREMIUM TIMES had confirmed the deaths of one person from Orsu-Ihiteukwa Community in Anambra and one other person from Orsumugho, a neigbouring community.

Mr Uzodinma also claimed that the troops raided and burnt some shops in Eke-Utu Market in Orsu-Ihiteukwa Community because materials used for manufacturing Improvised Explosive Devices (IEDs) were allegedly discovered in the market.

The governor claimed that suspected “bandits” operating in the area use the IEDs to fight security operatives and that an army officer, on duty in Orsu Awo-idemili Community, died last month from an explosion from the device.

“Last Saturday, a joint security force, which arrested a bandit, took him after his confession to guide them to where they operate from and manufacture the explosives.

“It turned out to be Eke-Ututu Market.

“They discovered four shops where fertilisers, ammonium sulphate and electrical gadgets used in manufacturing explosives were packed,” the governor said.

But PREMIUM TIMES learnt earlier from sources in the community that over 30 shops were razed by the troops during the operation.

The operation, the governor confirmed, was carried out by a combined team of Nigerian troops, officers of the Nigerian Navy, Nigeria Security and Civil Defence Corps and Nigeria Police Force.

He said the captain, who led the operation, alongside another officer, was lying “critical” at the Federal Medical Centre, Owerri.

The troops recovered all the weapons and fertilisers used by the bandits to manufacture the IEDs, he said.

“In the process, they burnt down shops and this is consistent with our policy.

“They were able to destroy all the shops, where the items were stored,” Mr Uzodinma said.

He accused members of opposition political parties in the state of condemning the operation and also brazenly blackmailing the troops without understanding the “true situation.”

The governor claimed that the traders in the market were forced to “pay taxes to unknown gunmen” before they would be allowed into the market.

“These are illegitimate taxes to enable people to open their shops.

“This is what we have been fighting all through,” he said.

He maintained that his administration would stop at nothing in the fight against terrorism, banditry and kidnapping in the state.

“It is not politics. It is about the security of lives and property of our people,” he said.

The governor claimed that “Eke-Ututu Market was destroyed to give Imo peace,” and that the government would rebuild it.

“If in the process, there are innocent traders who lost their items, the government will work out compensation for them.

“But the government has a responsibility to fight crime,” Mr Uzodinma said.

The governor denied that members of Ebubeagu, a security outfit backed by the Imo State Government, were part of the operation.

The invasion of the two South-east communities by the troops has attracted condemnations with some describing it as “painful.”

The military is yet to comment on the incident.

Mr Uzodinma’s reaction comes about four days after the attack.

Amnesty International Nigeria and other organisations have accused the military of extrajudicial killings in the South-east under the guise of fighting the outlawed Indigenous people of Biafra, which is leading the agitation for an independent state of Biafra.