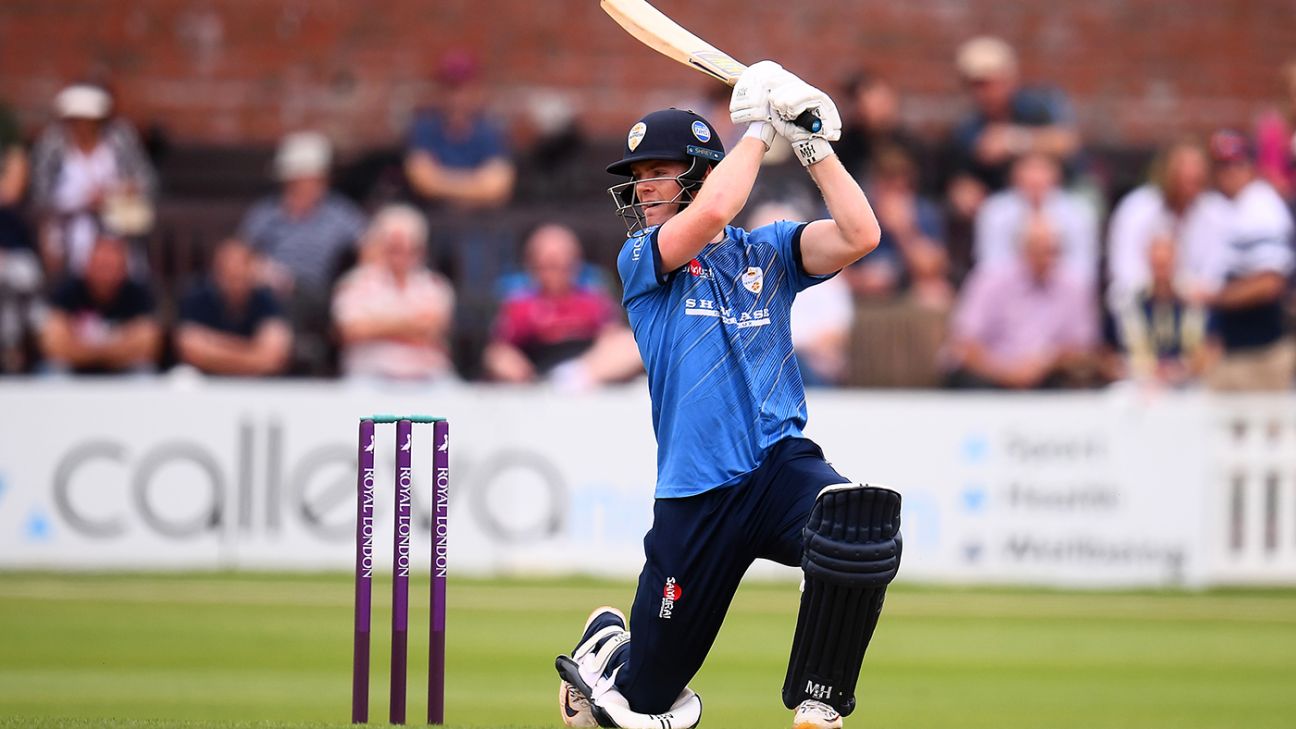 Brooke Guest anchored Derbyshire to Royal London Cup success against Essex with the highest 50-over score of his increasingly impressive career.

Guest, who has four first-class centuries to his name this season, frustrated a sizeable, sun-drenched Chelmsford crowd with a 79-ball 88, entering stage right in the midst of a mini-collapse when three wickets fell in five balls.

However, the Derbyshire innings spluttered back into life when the 25-year-old Guest was joined by Mattie McKiernan (72 not out) for a 125-run sixth-wicket stand. It helped Derbyshire reach 318 for 6 and, ultimately, to record only their second Royal London win in two seasons.

Essex were semi-finalists last year but were always second-best despite winning the toss and asking Derbyshire to bat on a benign wicket.

Only South African Grant Roelofsen and 18-year Jamal Richards hung around for any length of time, marking their debuts with 43 and 46 respectively, as Essex were bowled out for 226 in 45 overs to fall 92 runs short

Under the floodlights of a day-night contest, Essex’s chase got off to the worst possible start when Feroze Khushi was trapped on the back foot by Sam Conners without scoring. He was quickly followed by captain Tom Westley, who went in similar fashion to a ball that kept low from Ben Aitchison.

Josh Rymell steadied things with Roelofsen, the pair piecing together 53 runs, before edging Luis Reece behind to the irrepressible Guest for 38.

Robin Das entertained briefly with 19 from 13 balls, including a straight six, before Mark Watt gained revenge by positioning himself under a steepling catch off his own bowling. Will Buttleman was caught behind off Reece and suddenly Essex were in serious trouble at 99 for 5.

Roelofsen had impressed in local club cricket and the 2nd XI this summer, and played himself in quietly but efficiently. He had not looked in any trouble until he was stranded in mid-pitch by Anuj Dal’s throw from mid-on to be run out for 43.

Aaron Beard, at the other end then, was on the wrong end of a different type of run-out when McKiernan diverted Aron Nijjar’s drive on to the non-striker’s stumps with Beard out of his ground.

Shane Snater ballooned an attempted sweep off Alex Thomson to give Guest, behind the stumps, a comfortable catch. Nijjar and Richards refused to go down without a fight with a hard-hitting ninth-wicket stand worth 51 before Guest took his fourth catch to end Nijjar’s fun.

Richards clubbed two sixes over midwicket in his enterprising first knock before falling to a catch just inside the ropes.

Earlier in the day, Reece and Billy Godleman overcame a tentative start by targeting Beard for some rough treatment – including inadvertently bundling him over in his follow-through when Derbyshire’s captain scuttled through for a quick single.

Beard had conceded just two runs off his first two overs, but was withdrawn after a four-over opening spell with 35 against his name accentuated by successive sixes over his head from Godleman. Godleman departed when he decided to charge Snater and was bowled after a 64-run opening stand.

Harry Came joined Reece to add another fifty for the second wicket before chipping the ball back to Nijjar to precipitate the quick clutter of wickets. Tom Wood lasted three deliveries before his middle-stump was pegged back by Nijjar and then Reece tamely patted the ball back to Westley to end a 63-ball stay for 52.

Richards claimed his first senior wicket when Dal clipped to midwicket after a fifth-wicket partnership of 52 with Guest that put Derbyshire back on an even keel.

Guest and McKiernan kept the scoreboard ticking to the extent that Derbyshire only failed to score from four of the last 68 balls. Guest moved to 88 with a six over mid-on off Snater, but perished the next ball when attempting the same shot but only finding Beard on the fence.