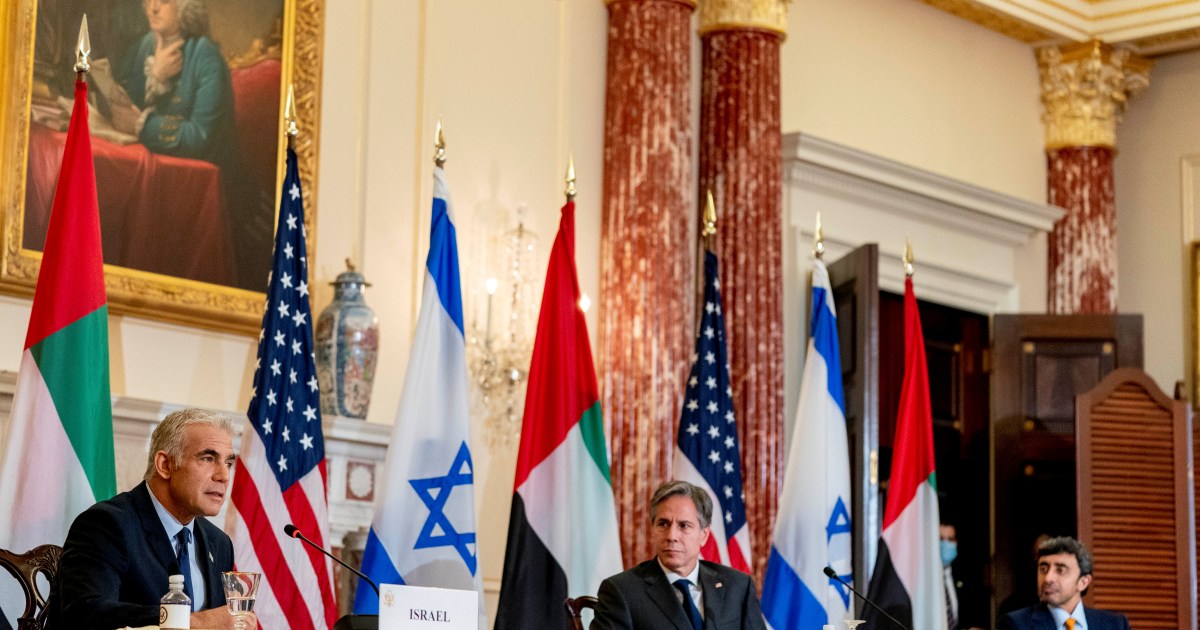 Israel “reserves the right” to act against Iran, Israeli Foreign Minister Yair Lapid has said, suggesting that “force” may be necessary to stop the Iranian nuclear programme.

Speaking at a joint news conference in Washington, DC with his Emirati and US counterparts on Wednesday, Lapid said the “civilised world” should make it clear that Iran will not be allowed to acquire a nuclear weapon.

“Secretary of State [Antony] Blinken and I are sons of Holocaust survivors; we know there are moments when nations must use force to protect the world from evil,” Lapid said.

Lapid’s remarks came at a time when indirect talks between Washington and Tehran to revive the 2015 Iran nuclear deal are on pause, with the Biden administration calling for negotiations to resume as soon as possible.

The multilateral agreement, formally known as the Joint Comprehensive Plan of Action (JCPOA), saw Iran scale back its nuclear programme in exchange for a lifting of sanctions against its economy.

Lapid said Iranians will “race to the bomb” if they do not believe that the world is serious about stopping them. “Israel reserves the right to act at any given moment in any way,” he said. “That is not only our right; it is also our responsibility.”

Iranian officials deny that the country is looking to build a nuclear bomb. Israel’s critics often point out that the country is suspected to have its own covert nuclear arsenal and that unlike Iran, Israel is not a party to the Treaty on the Non-Proliferation of Nuclear Weapons (NPT).

On Wednesday, Blinken reiterated the US administration’s support for a “diplomatic path” to resolve concerns about Iran’s nuclear programme, but he said Tehran’s lack of response to Washington’s calls for talks has not been encouraging.

“It takes two to engage in diplomacy,” Blinken said, cautioning that time is running out to revive the deal. “We’re getting closer to a point at which returning to compliance with the JCPOA will not in and of itself recapture the benefits of the JCPOA,” he added.

Former US President Donald Trump nixed the nuclear deal in 2018 as part of his “maximum pressure” strategy against Iran, under which the US piled sanctions on the country. In response, the Iranian government pushed its nuclear programme beyond the limits set by the agreement.

The Biden administration has said it is seeking to restore the deal, but six rounds of talks in Vienna have failed to revive it. The negotiations have been paused since June with the election of conservative Iranian President Ebrahim Raisi.

For weeks, the Biden administration has been floating the prospect of “other options” to address Iran’s nuclear programme, without elaborating on what those are. On Wednesday, Blinken said the US and its partners would look at “every option to deal with the challenge posed by Iran”.

“To be very clear, Israel has the right to defend itself, and we strongly support that proposition,” Blinken said in response to a question about Israeli posture towards Iran.

Iran has blamed Israel for a sabotage campaign against its nuclear programme, including cyberattacks and the assassination of nuclear scientists.

Wednesday’s joint news conference between the top diplomats of the US, UAE and Israel came shortly after the first anniversary of normalisation agreements between Israel and several Arab states.

The UAE, Bahrain, Morocco and Sudan normalised relations with Israel last year as part of what the Trump administration, which helped broker the deals, called the Abraham Accords.

The agreements have angered Palestinian leaders, who last year slammed the normalisation effort as a “stab in the back” to the Palestinian cause.

On Wednesday, Blinken reasserted that Washington’s supports the two-state solution to the Israel-Palestine conflict, citing US President Joe Biden as saying that Israelis and Palestinians “deserve to live safely and securely and to enjoy equal measures of freedom, prosperity [and] democracy”.

While the Biden administration has been promoting the two-state solution, its Israeli allies have explicitly rejected the possibility of allowing a Palestinian state to be established.

At a joint news conference with Angela Merkel earlier this week, Israeli Prime Minister Naftali Bennett pushed back against the German chancellor’s call for Palestinians to “live securely” in their own state.

“Based on our experience, the meaning of a Palestinian state means that very likely there will be established a terror state, roughly seven minutes from my house and from almost any point in Israel,” said Bennett.

Israel has also expressed opposition to the Biden administration’s plan to reopen the US consulate for Palestinians in East Jerusalem that was shuttered by Trump. But nearly nine months into Biden’s time in the White House, he has not established the diplomatic post.

On Wednesday, Blinken said the US is still committed to the plan. “We will be moving forward with the process of opening a consulate as part of deepening those ties with the Palestinians,” he told reporters.

Al Jazeera’s Rosiland Jordan, reporting from the State Department, said Blinken did not provide a timeframe for the move, however. “There’s no timeline set on this, it’s very much a political issue … for the government of Naftali Bennett, the Israeli prime minister,” she said.