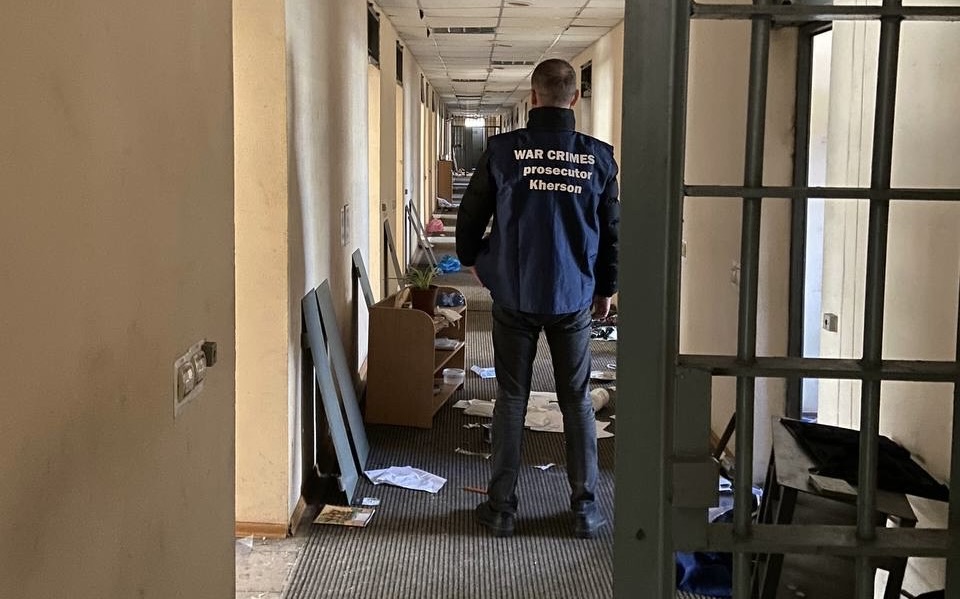 KHERSON, Ukraine —The uniformed men burst into Olha Honchevskaya’s apartment on Aug. 4. There were 15 of them, from Russia’s interior ministry.

Putting Honchevskaya and her husband Stanislav in separate rooms, the Russians questioned them and then took them to a detention centre.

The prison had drab beige walls and corrugated carpets. In the cells, the windows were barred and the tables were fixed to the floor.

Detainees had to recite the Russian anthem and pledge allegiance to President Vladimir Putin and his defence minister, Sergei Shoigu.

“Glory to Russia, glory to Putin, glory to Shoigu,” they were forced to say.

During one interrogation, the Russians poured water down Honchevskaya’s throat and zapped her with a stun gun, while telling her she was beautiful, she said.

Since Kherson was liberated three weeks ago, nine such detention centres have been discovered. More than 400 bodies have been recovered.

On the cell walls at one of them, the Russian national anthem was visible. “Glory to Russians,” read another message. A few metres away, a small Russian flag lay on the floor.

Like her husband, Honchevskaya was a police officer in Kherson when Russia launched its invasion of Ukraine on Feb. 24. Unable to evacuate, they were trapped in the city when Russian forces arrived.

Since Stanislav was a former Ukrainian soldier, the couple decided it was too dangerous to attempt to leave and they would be better off waiting out the occupation.

She spoke of her pro-Ukrainian sympathies only to family and friends, but an acquaintance later admitted he had told the Russians she was a police officer, and then came the knock at her door.

It was the first Thursday of August when the Russian’s barged into her home, telling her they were from the interior ministry and said they were “checking documents.”

“Everything was according to procedure. We were not beaten. They just found our police guns, which we were not hiding from them. They took it as evidence,” Honchevskaya said.

From the couple’s apartment, the Russians drove to her parent’s home, where they were allowed to leave their four-month-old Jack Russell terrier puppy.

Inside a three-level building that had been captured by the Russians on March 9, she was questioned for up to two hours while hooked up to a polygraph machine.

They wanted to know if she was present at demonstrations against Russia’s attempt to force locals to speak Russian, and if she was working for the Ukrainian security service, she said.

The interrogations resumed a few days later, with a different approach.

“They said to me that I should snitch,” she said.

When she refused to break, they suggested she sit and think, “because I need to put something on a scale to be free,” Honchevskaya said.

She shared a cell with another woman, but then more prisoners kept coming. “In each cell, it should be two people. In ours from three to eight on a constant basis.”

Meals were a mix of Russian army rations and dishes that prisoners prepared. When relatives brought supplies for the detainees, the Russians helped themselves to what they wanted.

Later, as a supposed goodwill gesture, the Russians let them have toothpaste. Prisoners shared everything, she said. “Even underwear and hygiene things.”


The women were treated better than the men, she said.

“Every day I heard when men were beaten. It could be during the day or night,” she said. She hoped the cries of agony were not her husband’s, although she realized even if they were she would not recognize him.

“The shouting was horrible.”

Her cell windows faced the prison interior, and she counted up to nine detainees arriving each day. All were different ages and included men and women. Some were relatives of Ukrainian soldiers.

The Russians badgered Honchevskaya to join their administration in Kherson, offering her any position she wanted for a monthly wage of 75,000 Russian rubles, or $1,650.

“You need to raise up the city,” they told her.

They proposed releasing her so she could work in health care, and brushed off her protests that she had no such training. “They just waved the hand, like it’s not needed,” she said.

“They wanted to show that they are good,” she said, adding the Russians let the women shower for five minutes once or twice a week. But at the same time, she understood they were out to destroy Ukraine.

On Aug. 17, guards came to her cell, covered her head and guided to an interrogation room. She was seated on a wet chair by four men who spoke in Russian.

“It’s a pity that you are beautiful,” one said to her.

The questions were the same as always, except this time they taped her to the chair and shocked her leg with a stun gun. “They didn’t beat me but put water in my throat,” she said.

She managed to break her hands out of the tape, so they handcuffed her instead. “And later because of it, I had marks on my hands and wounds on my back.”

The Russians threatened to bring her husband to see her. She thought she would not survive, but on Sept. 26 she was transported to a different prison and placed alone in a cell.

There she learned she had been sentenced to three to eight years under Russian law for possessing her police revolver. Later, the sentence was reduced to house arrest and she returned home on Oct. 20.

Andrii Kovalenko, prosecutor of Kherson region, said the facility where Honchevskaya was held appeared to have been used to detain Ukrainians who had held government positions.

“They were forced to cooperate with occupation forces and authorities,” he said. Detainees were held there from two to five months, and some were taken by Russian forces when they withdrew from the city.

Honchevskaya said she was worried about how her police colleagues would react when she stayed in Kherson during the occupation.

“But I can see that they support me,” she said. “I hope I will join the service again.”