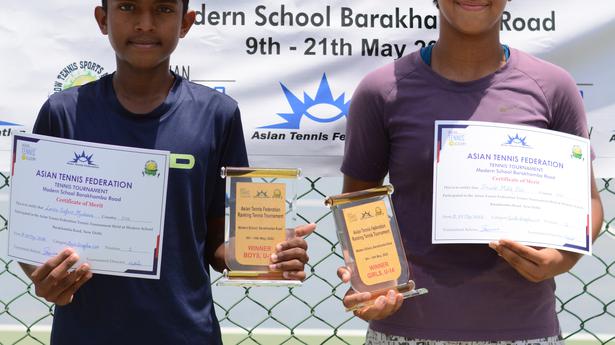 Levin Safoor Mydeen and Prachi Malik won the boys’ and girls’ titles respectively in the Asian under-14 tennis tournament at the Modern School courts, Barakhamba Road, on Saturday.

Levin handled the challenge from the big-built Vaibhav with a touch of assurance, throwing himself at every ball and stroking it with craft and courage.

Midway through the match, Levin suffered a blow to his left eye because off a shot from his own racquet. He overcame the setback calmly and sustained his good game to tame the powerful opponent.

In the girls’ final, Prachi packed a lot of punch against the small-built left-hander Aleena who gutsily coped with the power-play. Prachi was serving for the match at 5-0 in the second set, but Aleena pulled off a face- saving game.

Coach Gaurav Sharma, who has recently extended his service to the tennis academy at the Modern School, presented the trophies.

The same venue will host the Asian under-16 tournament, the first of its kind for the higher age group in the continent, from Monday.