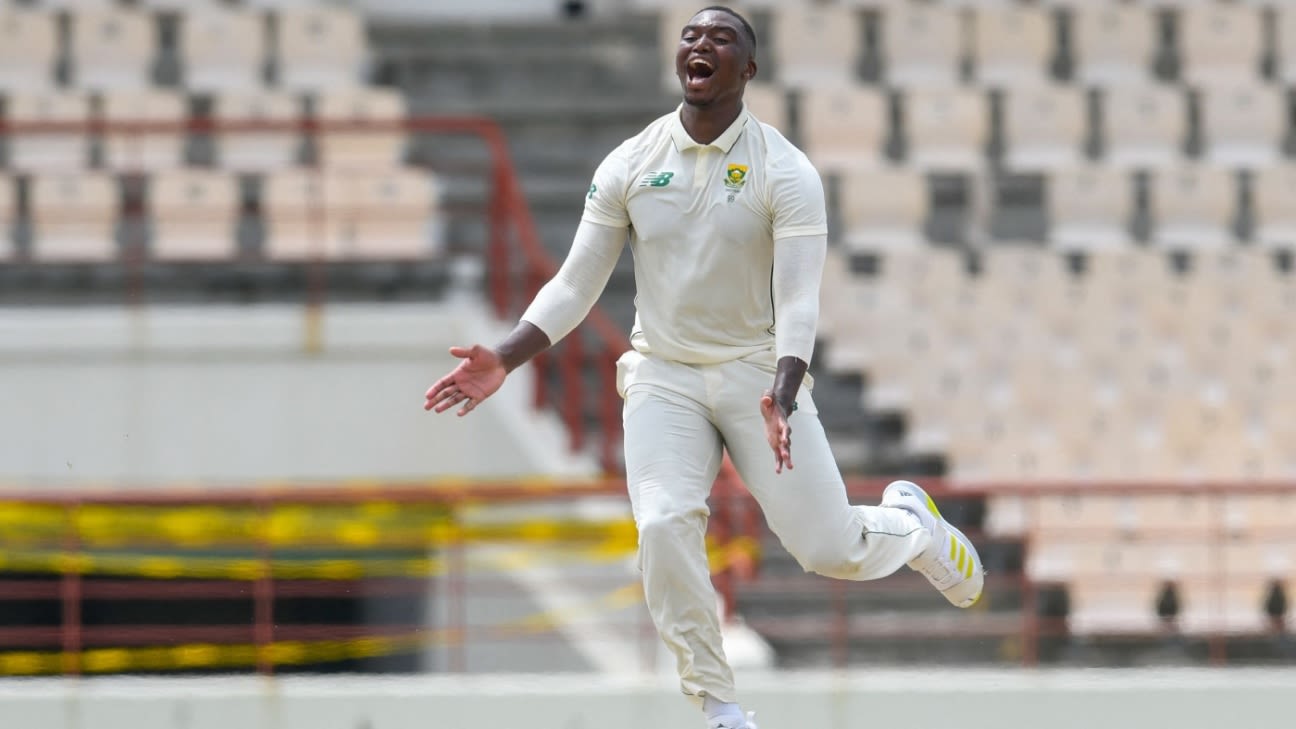 Lungi Ngidi hopes to have more opportunity to bowl with the Dukes ball after it helped him earn his second Test five-for in St Lucia. Ngidi, who took 6 for 39 against India on debut in January 2018, rated the Dukes ball as more seamer-friendly than the Kookaburra, used in South Africa, or India’s SG, because of the way it behaves.

“I prefer the Dukes ball. It stays harder and moves around a lot more,” Ngidi said after the first day’s play. “The Kookaburra ball tends to get a bit soft and once it gets soft, it doesn’t really swing and you try to look for reverse swing. The SG gets scuffed up really quick and it’s a really hard ball to maintain. But the Dukes ball is really a test of skill. Once you can get the wrist position right and hone in on your area, you can be very successful with this ball. Having bowled with it now, I hope I bowl with it for many, many years.”

Ngidi had never used the Dukes ball in a Test match before, having not played any Tests in England or in the Caribbean before this tour. He did have access to it when practising in South Africa and said the training group was “trying everything to control that ball,” and showed off the results of their persistence inside two sessions on the first day.

South Africa dismissed West Indies for 97, for their second sub-100 total since 2004, through a combination of aggression and discipline that Ngidi explained could be difficult to get right in favourable conditions. “You can get carried away, especially when it’s nipping around and swinging like that,” he said.

In the morning session, South Africa were anything but over-excited by conditions. While Kagiso Rabada and Ngidi kept the brakes on West Indies, Anrich Nortje tore through the top order. “My role definition has been very clear – it’s been to make sure I keep one end quiet. We do have some really quick bowlers and a lot of batsmen were struggling with them so for me to give them nothing was part of the plan,” Ngidi said.

His morning’s work was seven overs for 10 runs and he returned after lunch to take five wickets for nine runs, having changed ends in between whiles. “I felt more comfortable from the other end and my rhythm clicked,” he said. “It’s been a work in progress. I had to work very hard in the gym, on fitness, and the most important thing was the skill side of things and being able to swing the ball away from batters.”

Ngidi celebrated his second five-for with an emotional gesture to the heavens and then settled in to watch West Indies’ enjoy some, albeit not the same, success. Teenage debutant Jayden Seales, playing in just his second first-class match, took 3 for 34 and Ngidi was particularly impressed with his performance. “I was keeping a close eye on him. His seam presentation is what I tried to do when we were bowling,” Ngidi said. “He has got a great wrist behind the ball, a very clean action and it seems like he can run in all day, so he is a danger. It’s a very exciting future for the West Indies with him in the line-up.”

South Africa will hope it’s not too exciting, just yet. Their lead of 31 is still some way behind what Ngidi thinks could be match-winning, especially on a surface that will continue to suit the quicks. “On this wicket you are never really in. Maybe a lead of 150-200, we’ll take that,” he said. “But it’s still moving around a bit so any lead we can get, we will take as bowlers.”