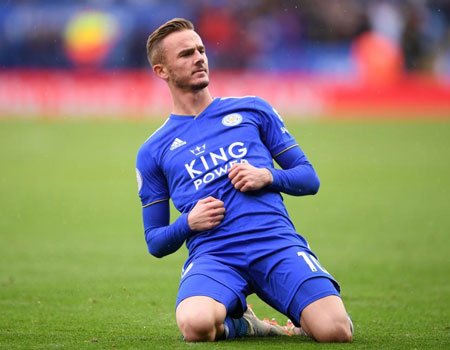 The attacking midfielder has been overlooked by England manager Gareth Southgate since his one senior appearance as a second-half substitute against Montenegro in a Euro 2020 qualifier in 2019.

“It’s such a shame I think for the country and for the boy himself [that he’s not in the England squad],” Rodgers told Sky Sports television.

“You see his talent and his performance level for the last 18 months is clear. I think it’s only Harry Kane who has been involved in more goals among English players.

“He’s an absolutely brilliant player and I really hope over the next few months he can continue the form he’s shown for the past 18 months and can somehow get into the [England] team.

“To have him there if you’re in trouble in any game, you know he can beat a man, make a pass, you saw his free-kick tonight. He’s got so many qualities that are deserving of at least being in the squad.”

Former England and Leicester City striker Gary Lineker agreed, saying on Twitter that Maddison, 25, was England’s most creative midfielder “and surely has to be in the squad for Qatar.”

Maddison, whose goals helped lift Leicester off the bottom of the table, told Sky Sports he hoped there might be a space for him with England.

“I watch international football and an opportunity at that level is something I desire and one I know I’d have an impact at and one I hope will come my way at some point.

“I’m not naive, I know there are top players in those forward areas, but I have a self belief and a confidence that I can be in that category.”

England will face Iran, the United States and Wales in Group C play at the World Cup, which begins on November 20.