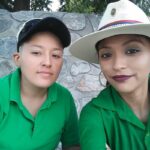 A married lesbian couple, Nohemí Medina Martínez and Yulizsa Ramírez from Texas, United States were tortured and shot dead before their bodies were dismembered and left in two garbage bags after visiting their families in Mexico.

According to the Chihuahua State Office of the Attorney General, the bags containing bodies of both women, who are aged 28 were found about 17 miles apart from each other on a stretch of Juárez-El Porvenir Road Sunday morning, January 16 on streets in the Mexican border town of Ciudad Juárez.

One of the bodies was in the San Agustín neighborhood and the other was found at the entrance of the Jesus Carranza village in what police believe to be a homophobic fueled crime.

It is still unclear how long the couple, who got married in 2021 and were mothers to three children had been in Mexico.

Chihuahua Committee for Sexual Diversity Director Karen Arvizo said; ‘The concern is that authorities will absolutely do nothing,’ Daily Mail reports.

On Monday, Ciudad Juárez authorities found the bodies of two other women at an intersection in the Patria-Zaragoza neighborhood. They also had been tortured and shot. They have not been identified.

One of the victims was declared dead at the scene. The other died at a local hospital from a gunshot wound.

It’s unknown if the four murders are connected. The investigation is ongoing .