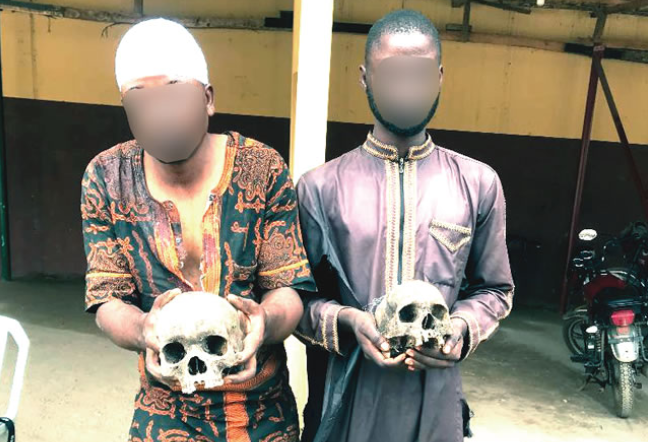 One of the suspects found in possession of two human skulls, Ganiyu Maruf, has confessed that he and the second suspect (Bashir Basit)’s quest to get rich pushed them into purchasing the human part.

Maruf and Basit were recently arrested by the Atiba Unit of Amotekun Corps in Oyo town, Oyo State, when the human skulls were discovered to have been hidden in a neighbourhood at Agunpopo community by the residents.

The suspects were sighted by a bush at the community when they were about to retrieve the skulls from where they kept them.

Before the suspects’ arrest, it was learnt that Amotekun had noticed earlier through its surveillance team that some men would go into the bush and emerge with a cellophane bag and leave.

This prompted them to plant some people in the area to keep a watch.

In an interview, Maruf, a bricklayer aged 30, mentioned the supplier of the skulls, one Dauda, whom he said is now deceased.

Maruf, who was inflicted with machete cuts on the head and had to be treated medically by Amotekun, said: “Before my arrest by Amotekun, Alhaji Adura, Kajola and I bought human skulls from an Oyo man called Dauda a.k.a Baba To. I had bought from him only once and it boomeranged.

“On the day I bought the two heads from Dauda for N30,000, I learnt that he had been arrested. I called Aafa Basit and asked him to go and keep the head. We both contributed the N30,000 equally and paid for the skulls to be used by us for money ritual.

“I knew about Dauda’s work because his elder sister was married to my father. I told him I needed two and he sold them to me.

“He had once been arrested for possession of human skulls by the Oyo State police command. When he was arrested the second time about three months ago, he mentioned Alhaji Kajola. Alhaji Kajola exposed Alhaji Adura, and Alhaji Adura named  me as one of Dauda’s buyers.

“By then, I had dropped the two skulls with Basit. Three of us were arraigned in court, and remanded in prison. We eventually got bail and I returned home about a month ago.

“I learnt that Dauda was bailed and couldn’t go to court. He was said to have died in his sleep the day after his release.

“When I got home, Aafa Basit came to greet me and appreciated me for not mentioning his name when I was arrested.

“He informed me of where he kept the skulls. I went to pick him on Thursday, and we had just parked the motorcycle I bought through instalment plan when the residents surrounded us, accusing us of keeping skulls in their environment.

“They started beating us, though we initially denied being the ones who kept them there. One of them inflicted machete cuts on my head until Amotekun operatives arrived and rescued us from being lynched. The mob almost killed us.”

Maruf said that he got to know how to make wealth through, ritual from his maternal grandfather’s note on native medicine tagged ‘secret of wealth.’

He also said that he did not know where the seller got the heads from; that he only went to purchase them since he knew it as the man’s trade when he was first arrested and the news went round Oyo town.

I didn’t know that my secret would be leaked like this,” Maruf said regretfully.

Explaining his involvement, Basit, aged 23, who claimed to be a Quranic teacher and bricklayer, said that one day, while working with Maruf who also works as a bricklayer, discussion came up on making money.

He recounted: “We started lamenting on how the wages we were getting were not sufficient for our survival. He thought of other ways we could make money and came up with the way to money through ritual, which he said he saw in his grandfather’s note.

“I asked him how we would get the skulls and he told me of what he heard about Dauda who was caught selling them.

“I told him I had no money and he said he ahd none either. We decided to start daily contribution. After a while, Maruf went to Dauda who asked for N50,000 for the two skulls we needed. We negotiated and the man agreed to collect N30,000 from us.

“Immediately our contributions added up to that amount, Maruf paid for the skulls. He brought them to me the following day and told me of how he learnt the seller had been arrested. He kept them with me and left.

“When I didn’t see him after two hours, I took the skulls to a bush and kept them there. I didn’t know when he was arrested but on his return, I went to greet him. He asked me for the skulls and I described the place I kept them to him.

“He called me early in the morning about three days later asking me to take him to the place. As if he knew what would happen to us, he asked whether I didn’t keep them close to where they would be detected, and I told him of an unoccupied house beside it and another one being occupied, but said the area is surrounded by bush.

“We were just parking the motorcycle we took there when the residents descended on us.”

The state Commandant, Amotekun Corps, Col. Olayinka Olayanju, who spoke on the arrest, said that the suspects would be arraigned in court after conclusion of investigation.