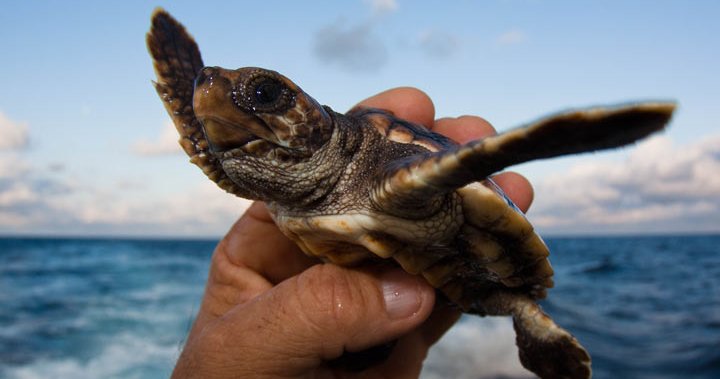 Almost all sea turtles that hatched on the beaches of Florida in the past four years were born female, according to scientists — and the problem isn’t likely to stop.

The culprit behind this phenomenon is human-caused climate change, which has resulted in increasingly frequent and severe heat waves that are interfering with sea turtle reproduction.

According to the National Ocean Service, the sex of baby turtles is determined after fertilization, when turtle mothers bury their eggs in the sand to incubate before hatching.

Read more: Freya the walrus sinks boats as her star rises — and she might be cleaning up Europe’s seas

“As the Earth experiences climate change, increased temperatures could result in skewed and even lethal incubation conditions, which would impact turtle species and other reptiles,” the National Ocean Service said.

Read more: Earth is spinning faster than normal, and we just had our shortest day in recent history

And it seems that this warning has come to pass in Florida and other places where turtles are prevalent.

“The frightening thing is the last four summers in Florida have been the hottest summers on record,” said Bette Zirkelbach, manager of the Turtle Hospital in Marathon, a city in the Florida Keys.

“Scientists that are studying sea turtle hatchlings and eggs have found no boy sea turtles, so only female sea turtles for the past four years,” Zirkelbach said, whose turtle centre has operated since 1986.

Such an uneven male-to-female ratio of sea turtles is worrying because the population may soon become stunted. It also serves as another example of how the climate crisis is interfering with Earth’s ecosystems:  extreme weather and climate patterns have proved too volatile for many species to adapt.

“Over the years, you’re going to see a sharp decline in (sea turtle) population because we just don’t have the genetic diversity,” said Melissa Rosales Rodriguez, a sea turtle keeper at the recently opened turtle hospital at the Miami Zoo. “We don’t have the male-to-female ratio needed in order to be able to have successful breeding sessions.”

The Sea Turtle Hospital is also combatting a wave of fibropapillomatosis, a disease that causes cauliflower-like tumours around the eyes and mouths of sea turtles, sometimes even forming in internal organs. The disease is contagious and can be deadly if not treated.

“The Turtle Hospital was the first. But, sadly … there’s a need all throughout Florida,” Zirkelbach said regarding the need for more rehabilitation centres in the state.

And it’s not just Florida’s turtles that are facing these threats.

A study on green sea turtle populations in Australia’s Great Barrier Reef found that only about one per cent of turtle hatchlings were being born male due to the same problem.

In the warmer, northern areas of the Great Barrier Reef, the researchers found that 99.1 per cent of juveniles, 99.8 per cent of sub-adults and 86.8 per cent of adult-sized green sea turtles were female.