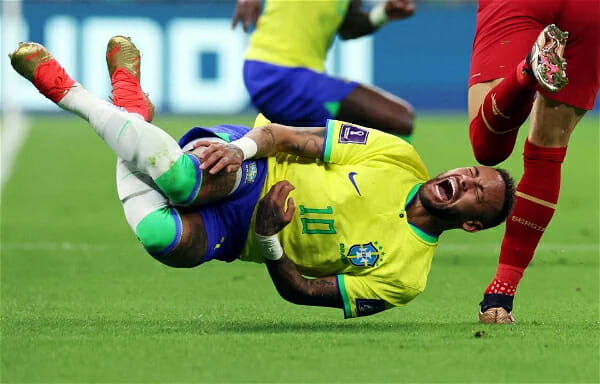 Neymar, the Brazilian forward, is recovering from an injury that will keep him out of the match against Cameroon on Thursday.

According to reports, the PSG forward will also miss his country’s round-16 match next week.

However, as he struggles to recover in time for Brazil’s first World Cup knockout game, there is growing concern that Neymar’s World Cup may be over.

After all of this week’s final games, the Samba boys will either tie against Portugal, Ghana, South Korea, or Uruguay in the round of 16.

According to Marca, Neymar’s ankle injury suffered in Brazil’s first match against Serbia could be more serious than the minor ankle sprain that the doctor suspected.

According to additional reports, Neymar’s injury could keep him out for up to three weeks, limiting his participation in the 2022 World Cup final in Qatar if Brazil advances that far.

Because Neymar is still unable to perform significant weight-bearing activities, he is only permitted to perform conditioning and rehab workouts in the water.

WITHIN NIGERIA understands that the 30-year-old has been receiving round-the-clock care that includes physiotherapy, cryotherapy, and electrotherapy since being withdrawn from the Serbia game.

However, His arrival has been repeatedly postponed.

If the Brazilian talisman is ruled out of the World Cup, it will be a major setback for his country and his football career.

Neymar, who will be 34 at the next World Cup, would have to wait four years to compete again.