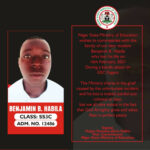 The picture of the secondary student who was killed during the attack on Government Science College Kagara has been released by the Niger State Ministry of Education.

Recall that WITHIN NIGERIA reported that several students at Government Science College (GSC) Kagara, in Niger State, have been abducted by bandits and one SS3C student was shot dead while trying to escape.

The bandits in military uniforms stormed the school premises which has close to 1000 students on Tuesday night, overpowered the security guard, before whisking away the students.

The Ministry of Education in a statement released on Saturday, February 20 which was signed by the Commisioner Hajiya Hannatu Jibrin Salihu sympathises with the family of the deceased student.

“The Ministry shares in the grief caused by the unfortunate incident and his loss is indeed painful and colossal to bear but we all take solace in the fact that God Almighty gives and takes. Rest in peace.”