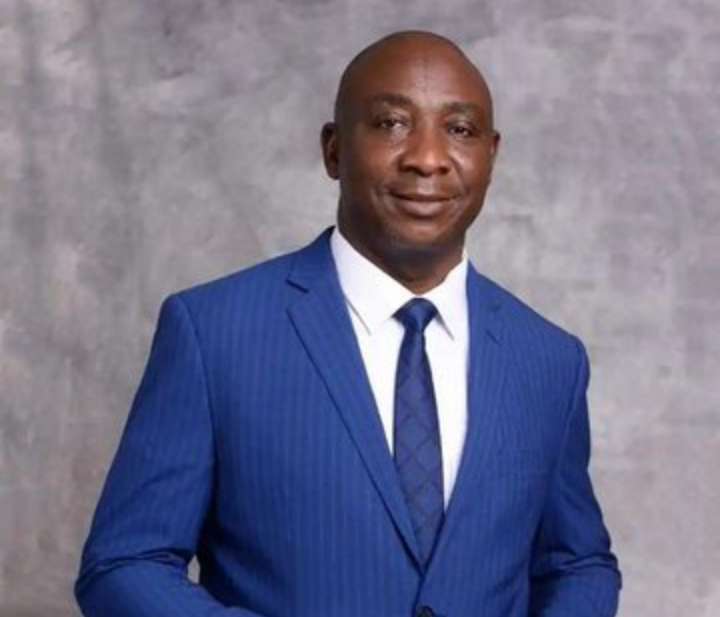 President of the Nigeria Football Federation (NFF), Alhaji Ibrahim Musa Gusau, in this exclusive interview with Tribunesport’s TAOFEEK LAWAL, speaks on his plans to take Nigerian football to new heights.

Sir, what is the main focus of your administration?

Secondly, during my electioneering, one of the key areas I mentioned is the issue of grassroots development which I have always laid emphasis on. I have always been a grassroots person. So, if we cannot identify talents from the grassroots, then we are deceiving ourselves. We need to set up a structure from there for Nigerian football and the only way we can achieve that is to ensure that we develop grassroots football which is one of my priorities and very soon, people will see what we are going to do in that area.

Is it not sad that Nigerian league is not on television while leagues even in Tanzania and Kenya are being beamed live to the outside world, what is your administration going to do to reverse this trend?

We are trying to see how we can restructure the league so that it would be very effective and run professionally, market-oriented and market-driven. And to also ensure that every single sector gets the value it deserves from the league. You know it has to do with the clubs, the corporate bodies, Nigerians, everybody. It must be seen that we are running a viable and standard league. I must let you know that plans are at advance stage to make sure that the league, at least the NPFL, is back on TV and also to have the infrastructure where we can play our matches. More importantly, the welfare of the players is key; the officials are also well taken care of and the match officials too because these are the key areas this administration will focus on.

What are your plans to reposition the national teams especially the Super Eagles considering their standard in the 90s?

Nigerians will see the changes in our national teams very soon. We just have to do things the right way. There is going to be a paradigm shift. For the Super Eagles and especially for the age-group teams, the era of inviting over 1,000 players of more to the camp is gone. You come to the venue of the screening and what you see is a chaotic situation and somebody will tell you he is screening to get the best players. But my question is how can you screen or get the best from the multitude that throng the camp in that kind of situation? This will definitely not happen under my watch. We must create a way within which we find young talents from the grassroots so that anytime we are calling for U17 camp or any of the age-grade teams, we must be sure who and who are in camp because we already know the established players. There is no way you will tell me you discover a talent after just 30 minutes in training and tomorrow you ask the same boy or girl to leave the camp because he is no longer a good player, how did you assess him in the first place? What we are saying is that we can achieve a lot through our grassroots developmental programme. Few days ago, we were discussing on how we are going to get sponsors for the U13 and the U15 teams which are going to be the bases from where we will get players to the U17. It is through programme like this that we have to get the players. It is going to be an open affair which will be at the states and the zonal levels. If you think you have an academy, go and participate there. Don’t think because you have one academy and we have camp opened, you will just bring your players, no. If you have an academy, it must have a base and the base must be any of the states. Take your players whether U15 or U17 and if he or she is a good player, he or she will be part of it. A golden fish they say has no hiding place.

We are also going to be organising periodic training for grassroots coaches. We will take at least five from each state, pay them some token to encourage them. They (the coaches) will now be the one to be identifying these talents (at the grassroots) for us. They know where competitions are held in the states and of course they will be there, watch, scout and this is the training we will organise for them. The coaches are expected to be given us monthly reports and let us know the direction we are going. They will have players they have identified and following consistently. By the time we achieve this by God’s grace, Nigerians will see a lot of changes. But the plain truth is I will not allow any open camp where thousands of children will be invited and nothing is achieved at the end of the day. We will set up the machinery from the grassroots that will give us the results that we want so that before you even get to the U17, everybody will already know the boy or the girl and where you are coming from and nobody can challenge that because the player has established himself.

On the Super Eagles, we so much rely on the foreign-based players. We have to because you and I know our league is not what is supposed to be. Obviously, if you put me at the helm of affairs of the Super Eagles, you cannot rely on a player that you are not sure of. You can only be sure of a player who you see performing week in week out in his club. I have been trying to see how I can talk to the coaches to be inviting one or two players from the grassroots. There is a challenge however. There are arguments they will put on the table for you that you cannot dispute and you just have to listen to them. However there is an argument that if we are to be considering the home-based players and the coaches invite a home-based players to the national team and he features in the team three times in a row and fortunately he was able to click, you know in the next three months or less than, he will not be home-based again. You now have to go back and invite another players and the sequence will go on. Nigerians should understand that what we can do is to reduce the number of foreign-born players of Nigerian descent in the national team.

Get me right, we are not saying they are not Nigerians and cannot represent the country but the mentality is not for African football. Most of the matches we play are within Africa be it AFCON or World Cup qualifiers and at the global level, we only go for tournaments or friendly matches. All our qualifiers are with our African brothers.

These players (born in Europe or elsewhere) do not possess the strength and the quality needed for African game and that is where the problem is. What we plan is that bulk of the national team will now be formed by players who started their career in Nigeria and fortunately have the opportunity to take their career abroad. You will agree with me that such players will have that African mentality and will understand what is at stake whenever he gets a call-up because he started here. But what we are saying is that we have to make our league work right.

So, how do you want to make our league work right?

One of the areas we are trying to address now is the collaboration with the Ministry of Sports and we came up with the Interim Management Committee (IMC) for the league. The IMC is solely under the NFF because whatever they are going to do they are reporting back here. Number one, how do we take it back to TV, two, how do we get the funding, number three, how do we put our infrastructure back to work, four, how do we ensure that we have proper officiating in our matches. These are the areas the IMC is looking at for solutions and they are reporting back to me on a daily basis on how far they have gone. We want to make sure that all these are achieved and the league will be better for it. We’re working tirelessly to ensure that anytime we are coming out to say we are starting the league, Nigerians will have a little hope that actually a change is coming.

What about Nigeria’s participation in CAF-organised competitions, why is it difficult for any of our clubs to win the CAF Champions League again after Enyimba’s 2003 and 2004 feat.

When we are talking about continental trophy it all lies in the league. We need to tell ourselves the truth that our league is not moving in the direction we want it to be. With this, you don’t expect any result at the continental level. If we are not comfortable with it at home, how do you expect us to get the result outside? But in the last three years, there has been significant improvement in the women’s league which is manifesting now, we are seeing it. There has been significant improvement in the way we have been managing the women’s premier league and the results are there for everybody to see.