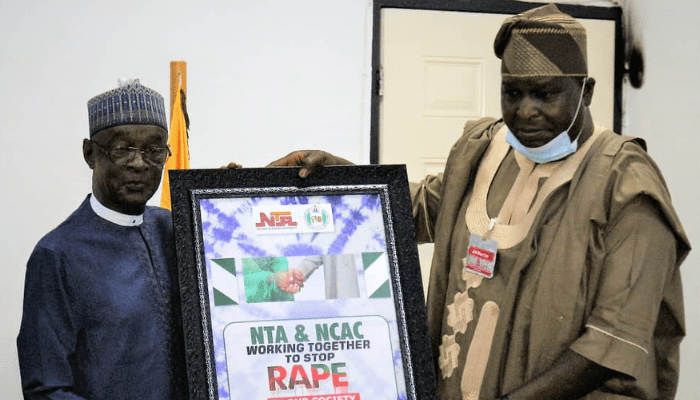 The Nigerian Television Authority (NTA) and the National Council for Arts and Culture (NCAC) have resolved together to tackle the menace of rape in Nigeria.

Segun Runsewe, director-general, National Council for Arts and Culture, and Yakubu ibn Mohammed, director-general, Nigerian Television Authority, made the resolution when the NCAC boss paid a courtesy call on his counterpart at NTA headquarters Abuja.

Runsewe stated that the effort of NTA on combating rape in Nigeria has drastically reduced the rate of rape as indicated by statistics from other states.

He added that the sustained dissemination of information and condemnation of rape by NTA has gone a long way to sensitize rape victims and their families on what to do and whom to complain to when they fall victim.

The NCAC boss said that as the custodian of culture in Nigeria and Africa, he knows that no aspect of Nigerian or African custom or tradition supports rape and as such, he would throw his weight behind any institution that is ready to fight rape and bring rapists to justice in Nigeria.

The NCAC director general further noted that he found in the NTA, a formidable ally in sensitizing Nigerians on the dangers and consequences of rape on victims. He added that his organisation strongly believes that NTA and NCAC can form the much needed synergy that is required to fight rapists all over the country.

On his part, Yakubu ibn Mohammed, director-general of NTA, noted that the federal government is determined to eradicate the scourge of banditry, kidnapping and very recently, rape, and that NTA has decided to be in the forefront of the fight against rapists and other social vices in Nigeria.

Mohammed added that an acronym “STAR” – Stand Against Rape – has already been adopted to fight against the social vice.

According to him, NTA is happy that Runsewe is coming to join forces with them to fight the menace of rape that is fast becoming a pandemic because he knows that anything Runsewe puts his hand into, he does it with all sincerity of purpose.

Mohammed concluded that rape is a pandemic that must be tackled with all determination. He promised to put in his best to fight rape and rapists to ensure that it is reduced to the barest minimum in Nigeria.

The highpoint of the courtesy visit was the inauguration of a joint planning committee to produce a working document for both organisations after the exchange of gifts by both heads of the government agencies.