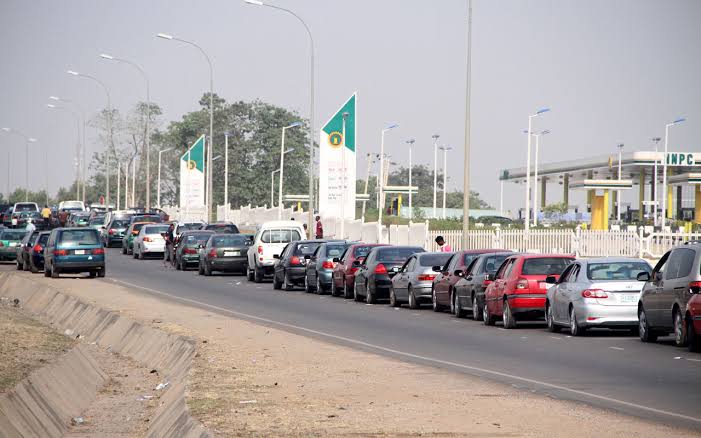 Motorists and residents of Osun communities have decried the lingering fuel scarcity which nearly collapsed movement of persons or goods in the state and environs.

When this reporter moved around, he noticed that gates of many fuelling stations were under closure while idle fuel attendants were seen pressing phones and watching movies.

This reporter also observed long queues in some fuelling stations. It was also gathered that filling stations who did not close their gates adjusted the pump price per litre of petrol to N230, N260, N270 per litre.

Speaking to WITHIN NIGERIA, a 46-year-old commercial driver simply identified as James said he spent all his time looking for fuel at cheaper price which denied him opportunity to earn money.

James while decrying the lingering fuel scarcity further stated that he has a lot of bills such as school fees, house rent among others and if he does not work, he has no alternate ways to generate income for his family.

“We are still battling with high cost of spare-parts to fix and make vehicles to be in good condition. Now, fuel scarcity is here. And it is bitting so hard on Nigerians. If I do not work tomorrow, my family won’t be able to eat because I am the sole provider”, he added.

Another driver identified as Rasak Ajipawo also lamented the scarcity of fuel and urged the federal government to intervene and find lasting solution to it.

The father of four whose vehicle plies Ilesa to Esa-Oke road told WITHIN NIGERIA that the hike increase in pump price due to scarcity has caused more hardship for motorists and passengers.

We have increased transport fare and many passengers who could not afford it were seen trekking shorter distances. I only reduced the price for students because I only have a child at the Polytechnic too, a rather sad Rasak said.

However, motorists are not the only ones affected by the scarcity of fuel. Entrepreneurs, passengers and dwellers also decry the scarcity and share how it affects them with this reporter.

A 36-year-old Ireti Adeyemi who is a dry cleaner while decrying the scarcity and hike in pump price told this reporter that he is terribly pained that he can not meet deadlines of his customers.

‘I embarked on dry cleaning to survive and raise family. It is sad that the same job is now being threatened by the same county that denied me job after graduation. Infact, I’m tired of this country’, a rather sad Ireti told his reporter as he moves away from closed gates of a fuel station.

For Mary Adelakun who relies on fuel to print documents, she wants the federal government and necessary bodies to intervene and resolve this crisis before it escalates.

According to the 28-year-old woman, unstable electricity made her rely so much on generator and virtually all her profits goes into fuel, making it extremely difficult for her to survival.

However, half a loaf is better than none. I have no choice than to continue since I have no option, she added.

A 24-year-old student of Osun State College of Technology, Esa-Oke identified as Rauf Aderibigbe also decried the scarcity and complained bitterly how it has affected transport fare.