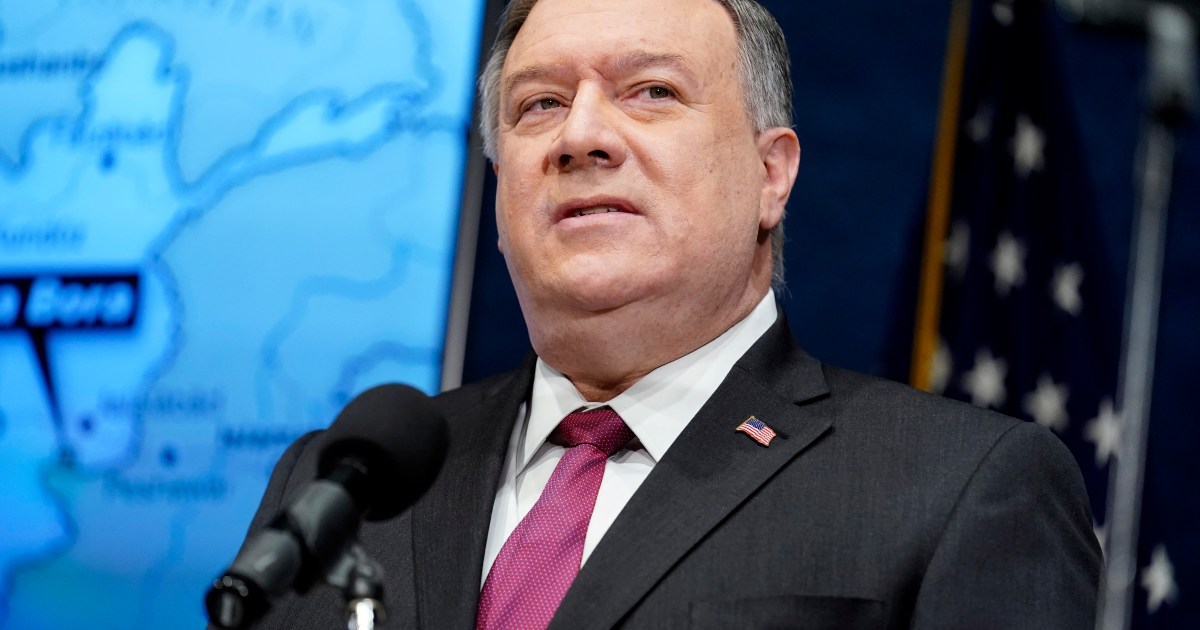 US Secretary of State Mike Pompeo said on Tuesday al-Qaeda has a new home base in Iran, though he offered no evidence in a speech in Washington, DC, a claim Iran immediately rebuffed.

Pompeo said al-Qaeda had centralised its leadership inside Tehran and that deputies of leader Ayman al-Zawahiri are currently there.

He added that ties between Tehran and al-Qaeda began to vastly improve in 2015, when the Obama administration, along with France, Germany and Britain, were finalising the nuclear deal Joint Comprehensive Plan of Action (JCPOA), a landmark accord signed that saw Iran limit its nuclear enrichment in exchange for a lifting of international sanctions.

Shia-ruled Iran and predominantly Sunni al-Qaeda have long been considered foes in the region, and while there has been reporting of al-Qaeda operatives using Iranian territory, claims of heightened coordination have previously been met with scepticism within the intelligence community and Congress.

“Al-Qaeda has a new home base. It is the Islamic Republic of Iran,” Pompeo said in a speech at the National Press Club.

“I would say Iran is indeed the new Afghanistan – as the key geographic hub for al-Qaeda – but it’s actually worse,” he said. “Unlike in Afghanistan, when al-Qaeda was hiding in the mountains, al-Qaeda today is operating under the hard shell of the Iranian regime’s protection.”

The secretary of state, who will leave office on January 20 when President Donald Trump’s term ends, also urged more international pressure on Tehran, but stopped short of calling for military action, saying: “If we did have that option, if we chose to do that, there’s a much greater risk in executing it.”

No one is fooled. All 9/11 terrorists came from @SecPompeo’s favorite ME destinations; NONE from Iran.

Pompeo’s statements could represent an escalation in the US’s ability to use force against Iran.

US legislation, the 2001 Authorisation of Use of Military Force (AUMF), allows US forces to pursue al-Qaeda anywhere in the world, meaning Pompeo’s claim could allow the Trump administration to say it already had Congressional approval for an attack on Iran under that authorisation if al-Qaeda were proved to be on Iranian territory.

The US Congress, following the January 2020 assassination of Iranian Major General Qassem Soleimani, passed a resolution that would have required the president to seek Congressional authorisation before taking military action against Iran, which Trump vetoed in May.

“I think the question we have to ask ourselves is, if Pompeo actually has any conclusive evidence of any form of an Iran-al-Qaeda alliance, why did he wait until the eight last days of his term to put this forward?” he told Al Jazeera.

“This is a person that has been pursuing a strategy of crushing Iran for the last four years,” Parsi added. “It would have done him well to put this down right away in order to further justify maximum pressure.”

The Trump administration has taken an antagonistic approach towards Tehran since taking office in 2017, pursuing a “maximum pressure” sanctions campaign after withdrawing from the nuclear deal.

Most recently, the US accused Iran of violating the Chemical Weapons Convention by supplying the late Lybian ruler Muammar Gaddafi with chemical weapons.

Several incidents have brought Tehran and the US to the brink of conflict during Trump’s term, including the assassination of Soleimani and tensions surrounding the Strait of Hormuz, a Persian Gulf waterway that serves as a vital shipping route in the region.

The US flew B-52 bombers over the Gulf three times in December, in what the Trump administration called a deterrence measure to keep Iran from retaliations on the anniversary of the US assassination of Soleimani.

With just eight days left in office for President Donald Trump, experts have voiced concern that the outgoing president may take “reckless” actions against Iran that could threaten the incoming administration of President-elect Joe Biden, who hopes to rejoin the nuclear deal and bring Iran back to compliance.

“What this appears to be is a desperate effort by him to try to reshape facts in order to serve his political purpose, which right now is to make sure that the Biden administration cannot undo the damage that Pompeo and Trump have done to us relations,” Parsi said.

Pompeo also announced on Tuesday that al-Qaeda’s Abu Muhammad al-Masri, who is accused of masterminding the 1998 bombings of two US embassies in Africa, had been killed in Iran on August 7.

It was the first official confirmation of the killing, which Pompeo said “points to” coordination between al-Qaeda and Tehran.

In mid-November, the New York Times published a story, citing unnamed US intelligence sources, that said al-Masri was killed by Israeli agents along with his daughter after living in Iran for years.

Iran’s foreign ministry rejected the claims at the time, saying US media shouldn’t fall prey to “Hollywood-style scenario-making by US and Israeli officials”.

The ministry also accused the US of “Iranophobia” amid the “maximum pressure” campaign Trump.

Pompeo on Tuesday also announced new sanctions on several Iranian officials and a $7 million reward for information on an al-Qaeda member he said was believed to be in Iran identified both as Muhammad Abbatay or Abd al-Rahman al-Maghrebi.