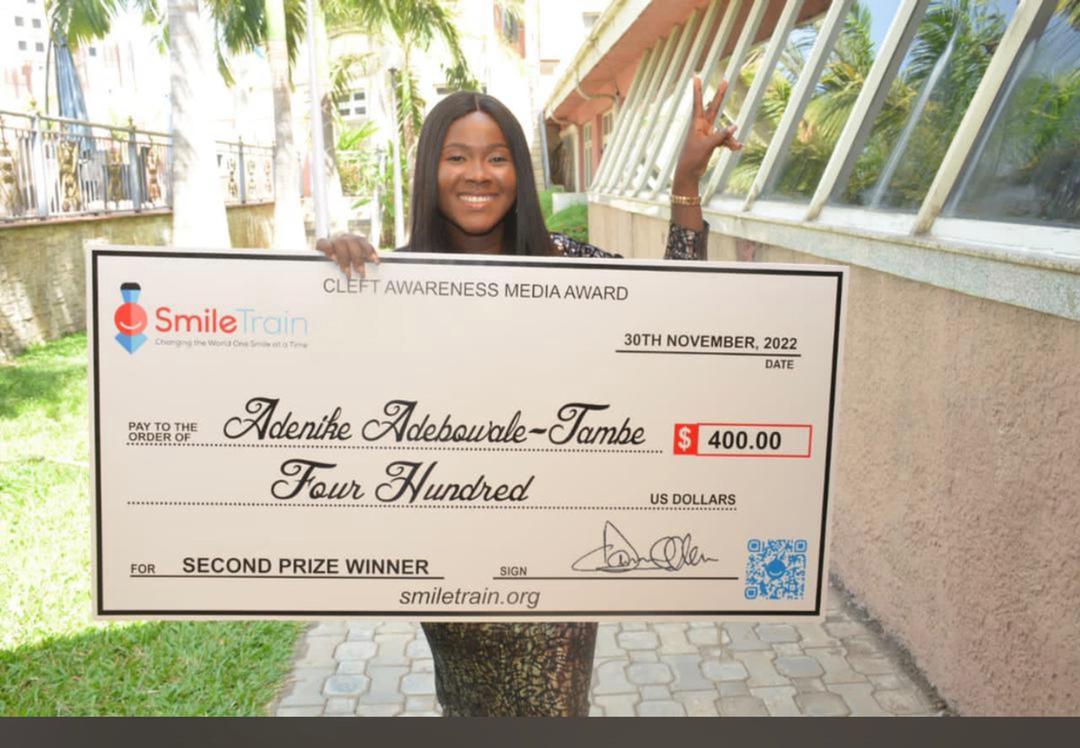 A Senior Health Reporter with PREMIUM TIMES, Nike Adebowale-Tambe, on Wednesday emerged as the first runner-up in the second edition of the Cleft Awareness Media Award (CAMA) Nigeria.

The annual award is organised by Smile Train, one of the world’s largest Cleft charity organisations.

Ms Tambe’s story on barriers restricting the treatment of Cleft patients in Nigeria was commended by the organisers for its thoroughness.

The report published in October follows the story of three years old Sharon born with a Cleft but who could not access treatment due to stigmatisation, and her parent’s inability to fund the surgical operation needed.

The winner of the 2022 CAMA, Gyang Bere, a Daily Sun reporter, got a cash price equivalent to $600 while Mrs Adebowale-Tambe and the second runner-up, Waliat Musa of The Guardian Newspaper got the equivalent of $400 and $300 respectively.

Speaking at the award ceremony in Abuja on Wednesday, Victoria Awazie, the Senior Programme Manager, West Africa, for Smile Train, said CAMA is a way of encouraging journalists and the work they do.

Ms Awazie said: “We realised that journalists do not give the correct information about cleft and because there is a lot of stigmatisation surrounding it, people tend not to understand what this is.

“This prompted Smile Train to organise training and workshops for journalists to understand what cleft is all about and how to report about it.

“The award is therefore a way of encouraging journalists and their work because we know they render selfless services.”

Ms Awazie said the three winners were selected out of 32 entries. She said judges were from Kenya, Mozambique, and other countries.

At the event, Smile Train’s Vice President and Regional Director, Africa, Nkeiruka Obi, also received an award from the Nigerian Society of Anaesthetists (NSA) in collaboration with the World Federation of Societies of Anaesthesiologists (WFSA).

Ms Obi expressed her appreciation for the honour.

“We are excited and proud of our relationship with NSA and we will continue to work together to provide safe surgery and anaesthesia for children born with Cleft,” she added.

Mrs Adebowale-Tambe is a Senior Health Reporter with PREMIUM TIMES.

She has previously been awarded the outstanding reporter of the year (2021) by National Primary Health Care Development Agency (NPHCDA) (Media Awards), Award of Recognition for best story in the online category (2020) by the Association of Nigerian Health Journalists (ANHEJ), Award of Excellence for online HIV reporter of the year (2019) by the National Agency for the Control of AIDS (NACA), Winner of the Africa Health Budget Network (AHBN) Media Award, among others.

“I feel honoured to have emerged as one of the winners of the second edition of CAMA,” Mrs Adebowale-Tambe said at the ceremony.

She said the honour is an encouragement to keep raising awareness about cleft and dispel myths and misconceptions surrounding the health challenge.