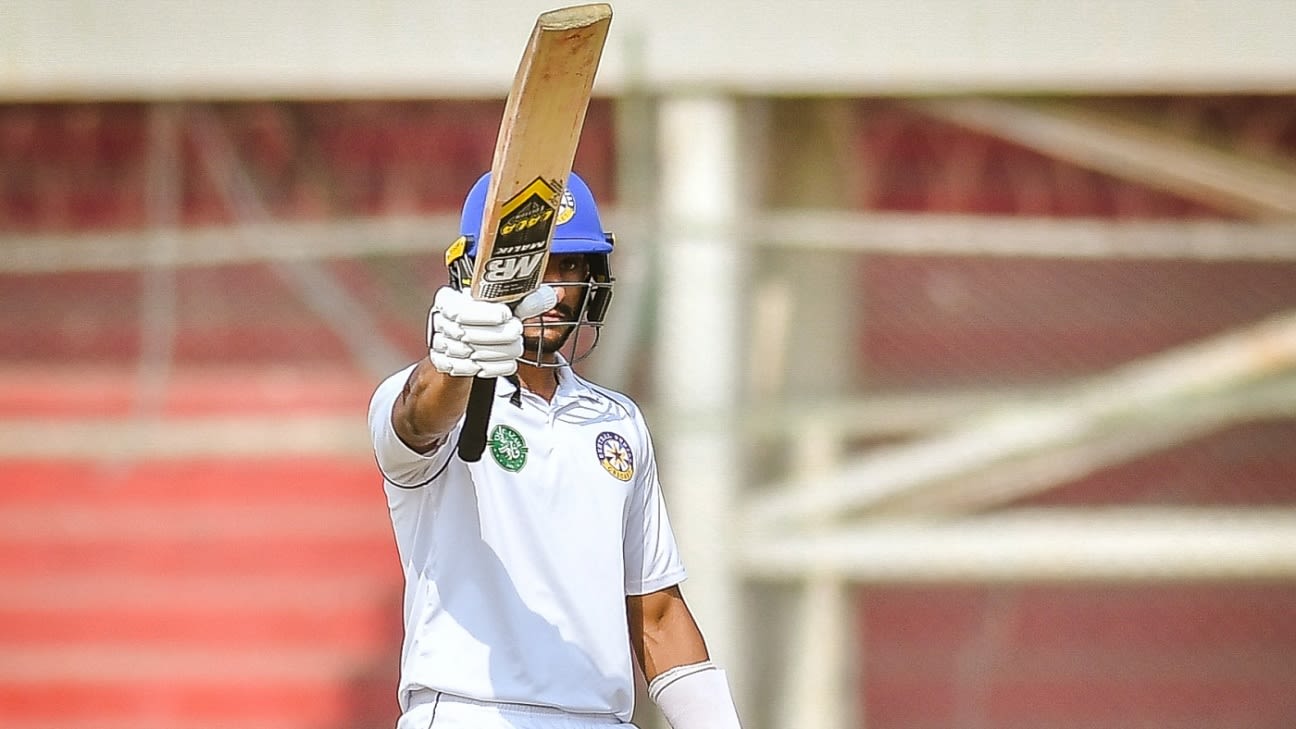 Hasan Ali nearly sealed a remarkable turnaround in the fortunes of his team Central Punjab – as well as his own – hitting a final-day hundred in a dramatic and first-ever tied final of the Quaid-e-Azam Trophy.

Central Punjab had slipped to 249 for 8 in their chase of 356 against Khyber Pakhtunkhwa (KPK) before Hasan’s 61-ball unbeaten 106 – his maiden first-class century – pulled them back in one of the most epic domestic finals.

It was the perfect ending to a title scrap that both teams did their best to liven up – the last day saw 215 runs scored and eight wickets falling till two teams that had snapped at each other’s heels for five days hugged, shook hands and, possibly, went back wondering where they fell short. One person who should have no such thoughts, though, is Hasan, who almost pulled off the unthinkable for this side.

It didn’t happen in the end, but not for lack of effort on his part. Here’s what day five was like: Central Punjab were chasing 356 to win the final; they started the last day at 140 for 2, and were 179 for 5 not too long after, both overnight batsmen gone; then it was 249 for 8; and then Ali, with a best first-class score of 59* before this one, let rip. Ahmed Safi Abdullah played his part with 35 in 23 balls in a ninth-wicket stand of 70 with his captain. But then Waqas Maqsood, the last man, sent a checked shot off offspinner Sajid Khan only as far as Kamran Ghulam at mid-on to spark big celebrations – led by Sajid’s full-throated roars – among the KPK players. They hadn’t won but now they hadn’t lost either. The celebrations were evidence of that.

As was the image of Maqsood, on his knees, till Hasan went up to him, tapped him on his head, and the pair walked back together, apparently dejected but proud.

Usman Salahuddin and Mohammad Saad had started proceedings for Central Punjab on the final day, on 51 and 27 respectively. Saad was back in the dressing room within four balls, though, Arshad Iqbal’s medium pace trapping him lbw for his overnight score. Saad Nasim, who came into the match on the back of innings of 136*, 72 and 55, couldn’t last long, perishing for 5 to Sajid, and KPK were very much on top at that stage. That’s how the balance remained as Salahuddin (67), Qasim Akram (30) and Ali Shan (11) fell, leaving Central Punjab at a precarious 202 for 7. But that’s when things started to turn, and doing most of the changing of the script was Hasan.

With No. 9 Bilawal Iqbal, he added 47, Iqbal contributing 7. Then came the stand with Abdullah, which took Central Punjab to 319. No. 10 Abdullah did a decent impression of his captain with five fours and a six in his 23-ball knock. And finally, when it was make or break, Hasan took the lead in that last stand, Maqsood scoring 4 in the 36-run association, during which Hasan went past his century. It was almost enough for Central Punjab, and might have been had Maqsood played out the 118th over with the scores level. But the very hittable delivery, quite in the slot, from Sajid, was too tempting for the last man. He couldn’t get under it enough, though, and Ghulam, whose second-innings century had put KPK in a position of some command, didn’t really need to do much to cling on.

Hasan has been an instrumental – and unlikely figure – in Central Punjab’s run this season. His season began with him under an ongoing injury cloud and out of national reckoning. But he eventually returned and took over as captain, after Azhar Ali had led the team through the first four rounds, and he turned Central Punjab’s season around. They were at the bottom of the table with just 30 points – three defeats and two draws at that stage – before recording four wins in the last five games under Hasan to storm into the finals. And his own individual contributions were essential – finishing the season with 43 wickets at just 20 (in just nine games), the highest wicket haul for a fast bowler this season. He also averaged nearly 25 with the bat, with two fifties to go alongside his hundred – it was all nearly enough, but not quite.