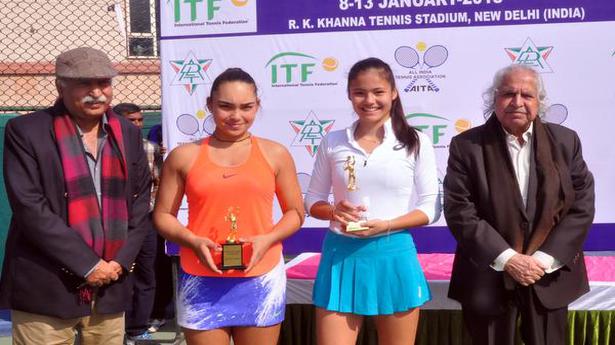 When Mahak Jain won the girls’ title in the Road to Wimbledon UK under-14 tennis championship in 2015, Emma Raducanu had given a hint of her future by winning a doubles quarterfinal against the Indian 6-2, 6-0.

Raducanu, about 12 then, had partnered Andre Lukosiute to beat Mahak and her partner Mathilde Sreeves.

The 18-year-old Raducanu has taken the quickest steps, as a qualifier ranked 150, to a Grand Slam title in New York. Her best title before this was the $25,000 tournament she won in Pune in December 2019.

In January 2018, Raducanu had won the ITF grade-3 junior tournament in Chandigarh, and followed that with the grade-2 title in Delhi.

Vaidehi Chaudhari had a good match against Raducanu in Delhi, but retired at 4-6, 2-4 owing to a sprained ankle

“I remember Emma being very energetic and getting every ball back. She was very quick on court. I feel very proud to have played a good match against her,” recalled Vaidehi, who trains with coach Jignesh Raval in Ahmedabad.

“Emma was on a mission then. She was winning a series of junior titles at that time. She was on fire,” recalled Raval.

Conceding that Raducanu’s incredible success has lent a lot of clarity to the right approach, Raval said that he would make a series of videos to educate players and parents about, “what to do, and what not to do”.