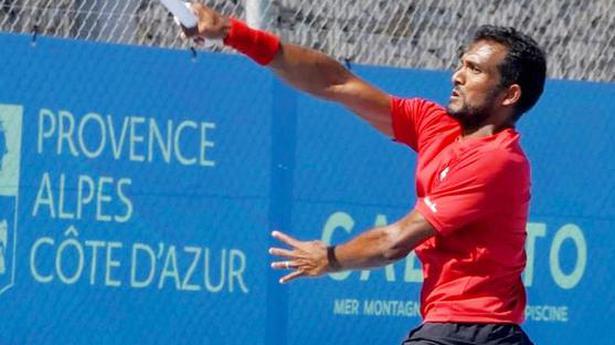 It has been a struggle post the pandemic for Sriram Balaji in the doubles circuit to retain his composure and confidence, as he slipped from a career best doubles rank of 96 to 183.

The 31-year-old from Coimbatore, Balaji had won nine matches in all from 19 tournaments in the season.

Thus, the doubles title with Ramkumar Ramanathan in France on Saturday came as a whiff of fresh air for Balaji to strengthen his resolve to climb the slippery ranking ladder.

“This title is special. It has been more than two years since I won a title. I was one of the first players to get out of the country after the lockdown last year to compete in tournaments,” recalled Balaji.

For the most part, Balaji had partnered Luca Margaroli of Switzerland. The rest of the time he teamed up with compatriots Jeevan Nedunchezhiyan, Arjun Kadhe and Ramkumar.

“When you don’t win many matches, like in the last two or three months, it is mentally difficult,” conceded Balaji.

When he was finding it hard to win two matches in a row, it was the coaches who kept Balaji’s morale high, helping him stick to the basics and stay focused on the process.

“Big thanks to my coaches Alexander Waske and Bastian Suwanprateep. They were always with me in every situation,” acknowledged Balaji.

With Ramkumar having joined the Davis Cup team for the tie against Finland in Helsinki, Balaji will be competing the next week in Istanbul with Hiroki Moriya of Japan.

“After that I am taking a week off and will play three Challengers with Ram,” said Balaji.

Even though Ramkumar stays focused on his singles, he has given the best results for Balaji this season in doubles, with one title and two semifinals.

Balaji has tried to strike the right combination in doubles so as to get back to the Grand Slam circuit.