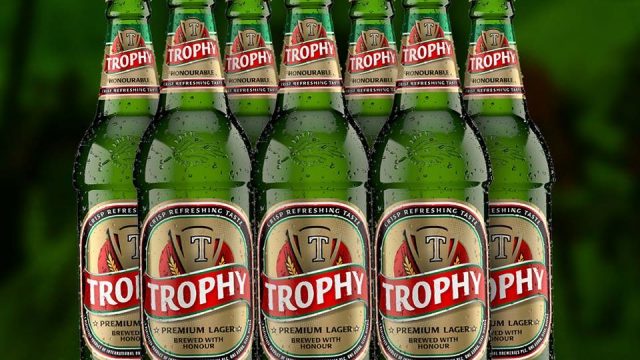 Leading Beer Brand, Trophy Lager, a product of giant brewers, International Breweries Plc is set to put a smile on the faces of its teeming consumers with the launch of a campaign it has tagged, ‘Honourable Promotion ToGba’yi’.

During the one-month-long campaign, consumers will get the opportunity to win instant airtime as well as cash prizes when they look under the crown of Trophy Lager.

The under-the-crown promotion will see thousands of consumers win Instant Airtime prizes. Consumers will also win Cash Prizes when they reveal the promo code under the crown and dial *8011*Promo Code#. Consumers will enter weekly draws to win cash prizes of N5,000 and N10,000. 10 lucky winners of N1,000,000 will be announced following nationally televised weekly draws.

Speaking on the idea behind the promo, Marketing Manager, Trophy, Bamise Oyegbami revealed that ‘Gba’yi’ which translates to ‘Take Prestige’ seeks to celebrate the respect and admiration consumers of Trophy Lager command through an under the crown promo.

“Trophy Lager is rewarding the loyalty of its consumers by underlining the importance of being honourable in everyday situations. As a premium beer that prides itself in consistently fulfilling its promise to deliver a crisp and refreshing experience to consumers, we are going one step further to encourage our consumers to imbibe honour as a way of life, hence, the sobriquet ‘Honourable’ for Trophy Lager,”Oyegbami said.

Explaining further, Marketing Director, International Breweries Plc, Tolulope Adedeji,noted that Trophy Lager exists to recognise Honourables, reward big and small achievements, and ignite connects among consumers. “As the flagship brand of International Breweries, a proud part of the Anheuser Busch InBev (AB InBev), the world’s largest brewer with more than 400 beer brands, Trophy has been a huge part of social occasions for decades and has evolved over the years, gaining wide acceptance from its consumers. This is why we have decided to reward them with the ‘Honourable Promotion ToGba’yi’ campaign,” she said.

As the festive period draws closer, Trophy’s teeming consumers can look forward to being one of the lucky ones that will become the next set of millionaires through the Consumer Promo.

The Trophy Honourable Promo ToGba’yi will run from November to December 2020 and is only open to individuals who are 18 years and over.