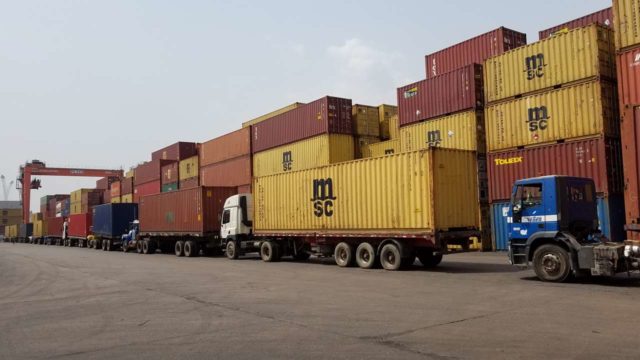 It’s Cheap Blackmail, Says MWUN
Truckers under the aegis of the Council Of Maritime Transport Unions And Associations (COMTUA) have cried out over the outrageous extortions from over 50 illegal checkpoints along the ports access roads in Apapa, Lagos.

The group, in a statement by its National President, Adeyinka Aroyewun, alleged that some officers of Maritime Workers Union (MWUN), Lagos State Park and Garages Management, and the Truck Transit Park (TTP) are among those breeding extortions on the port corridor.

Aroyewun called for urgent intervention of the government and its agencies to arrest the situation to enhance the ease of doing business at the seaports.

He said: “It is with deep frustration that we write to highlight and bring to your notice, the excruciating torture, daily extortion, and destruction of trucks our members face in the hands of touts who position along port access roads and major highways in Lagos.

“To say the least, it is sad to note that this brazen illegality continues in broad daylight without any modicum of the check,” he stated.

Aroyewun said that the truckers have written several petitions to the government (at different levels) bidding to have relevant government authorities to call the miscreants to order, all to no avail as all its entreaties were not attended to.

He added that: “Letters of complaint and consultation to Park and Garages Committee, Park Administration Committee and Maritime Workers’ Union (MWUN) on the activities of their members at best fell on deaf ears as it has not yielded results”.

Aroyewun, in the statement, alleged that “Maritime Workers Union (MWUN) have 20 points from Coconut to Tincan Port Second gate where NGN2,000 is forcefully collected per point from our members. This is under the watch of Comrade Adewale Adeyanju, the President General, whose main coordinator is Taofeek Shorinola, also known as and called Sheu Tao.”

“Park and Garages Management has Abayomi Abeyi Ajele, also known and called Ikomodina; Michael Adewale, alias hot water; and one Raji, aka student mount. In all, about 30 extortion points between Mile 2 and Sunrise Bus Stop, where between N2,000 and N6,000 are forcefully collected per point.

“Chiboy, Adeleke, and others are for park administrators who extort around Kirikiri, FATGBEMS, Badagry Express road, and inside Amuwo Odofin.

“Of another serious concern is the involvement of a royal father, the Oniba of Iba land, Oba Sulaimon Adeshina, who encourages his committee members to create more points of extortion,” he added.

According to him, the role of government is susceptible in the illegality going on the port corridor and is of grave concern to the association.

Most disturbing is that TTP continues monetary collections without considering the hardship truckers face in the hand of this hoodlum, he stated.

He said: “MWUN is a partner in growing our economy and ensuring peace in all our ports, terminals, jetties, and oil and gas platforms which informs our unblemished decade-long record of maintaining industrial peace in the maritime sector. Our record is in the public space for all to see.

“Short of libelous, Aroyewun assertion that MWUN tolls 20 checkpoints from coconut Bus-Stop to Tin Can Island Gate, a distance of about 1000 meters is a figment of his myopic imagination and a deliberate lie designed to malign our good image,” he said.