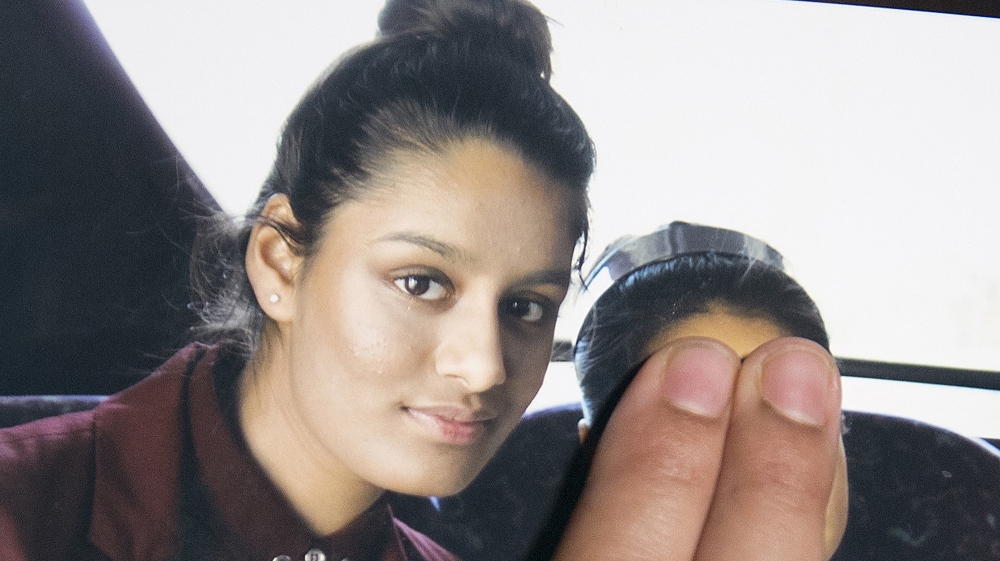 The 21-year-old, who joined ISIL as a child, is being held in a detention camp in Syria after being stripped of her UK citizenship in 2019.

Begum’s case has been the subject of a heated debate in the UK [File: Laura Lean/Pool via AFP]

The United Kingdom’s highest court has ruled Shamima Begum, a woman who was stripped of her citizenship after fleeing to Syria to join ISIL (ISIS), should not be allowed to return to the country to challenge the decision, because she poses a security risk.

Begum left London in 2015 when she was 15 and travelled to Syria, via Turkey, with two friends from her school.

Now 21, she is currently being held in a detention camp in Syria after her British citizenship was revoked in 2019 by then-Home Secretary Sajid Javid.

Javid argued at the time that Begum was eligible for Bangladeshi citizenship, the birth country of her parents.

But international law forbids countries from making people stateless by revoking their only citizenship.

The UK’s Court of Appeal previously agreed she could only have a fair appeal of Javid’s decision if she were allowed back into the country.

But the UK’s Supreme Court overturned that decision in its unanimous ruling on Friday, meaning that although she can still pursue her appeal against the decision to take away her citizenship, she cannot do that in the UK.

The UK government, guided by intelligence agencies, argued that those who aligned with ISIL posed a serious risk to national security.

“If a vital public interest – in this case, the safety of the public – makes it impossible for a case to be fairly heard, then the courts cannot ordinarily hear it,” the Supreme Court judges concluded.

“We are pleased with the Supreme Court’s unanimous decision. As we’ve said before the government’s priority is maintaining our national security and decisions to deprive individuals of their citizenship are not taken lightly,” his spokesman told reporters.

“We will always ensure the safety and security of the UK and will not allow anything to jeopardise this.”

In Syria, Begum married an ISIL fighter and lived in Raqqa, the capital of the self-declared caliphate. She had three children since leaving the UK, all of whom have since died.

Her case has been the subject of a heated debate in the UK.

Some say she forsook her right to citizenship by joining ISIL, while others believe she should not be left stateless and must face trial at home.

Javid welcomed the Supreme Court’s ruling, saying the home secretary “is responsible for the security” of the UK’s citizens and borders, and therefore “should have the power to decide whether anyone posing a serious threat to that security” can enter the country.

“There are no simple solutions to this situation, but any restrictions of rights and freedoms faced by this individual are a direct consequence of the extreme actions that she and others have taken,” Javid said in a statement posted on Twitter.

“The right to a fair trial protects all of us. Stripping someone’s citizenship without due process sets a dangerous precedent,” the group tweeted.

Liberty said although the government had claimed Begum was eligible for Bangladeshi citizenship, she was born in the UK and had never held a Bangladeshi passport.

In 2019, Bangladesh’s foreign minister told Al Jazeerat there was “no question of [Begum] being a Bangladeshi citizen as she never visited the country”.