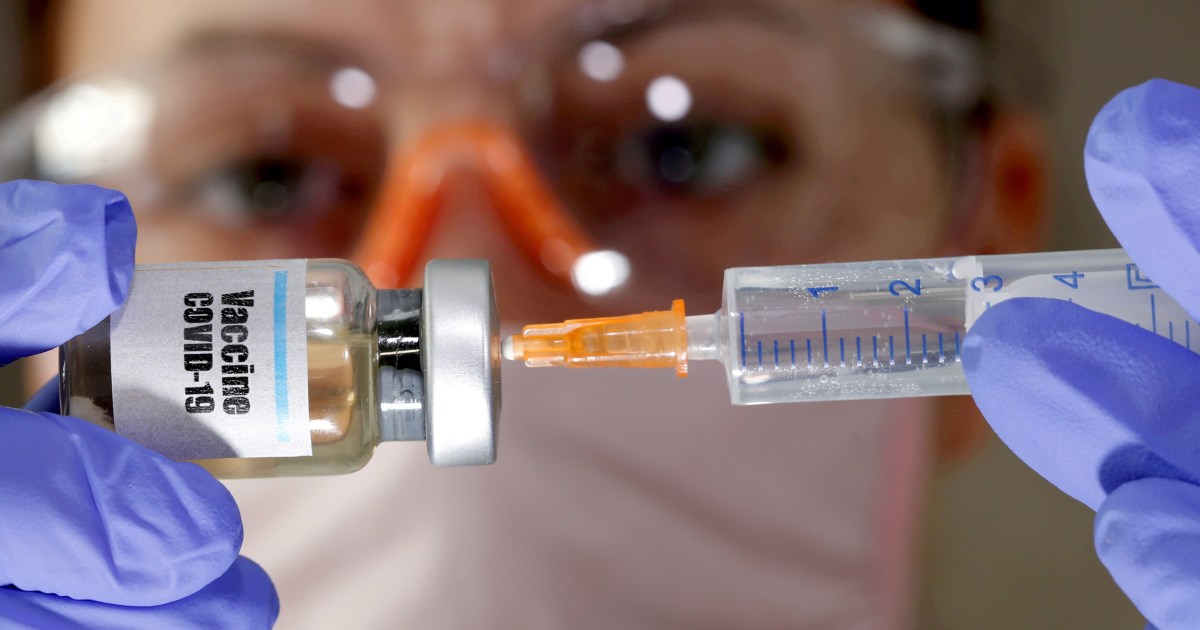 Markets were buoyed by positive vaccine news this week, but the global economy isn’t out of the woods yet when it comes to recovering from the COVID-19 crisis, the IMF warns [File: Dado Ruvic/Reuters]

As countries around the world impose stricter measures and shutter bars, restaurants and other businesses to contain COVID-19 infection surges, many of us have been doom-scrolling through our smartphones more than usual.

Why not learn something new? We’re rounding up the must-know numbers each week to keep you informed and up to date on major business and economic stories as well as the ones you might have missed.

Here are five major numbers you need to know this week.

United States pharma giant Pfizer Inc and its German partner BioNTech announced this week that final results from the phase three trial of their COVID-19 vaccine showed it to be 95 percent effective – the highest success rate for any pandemic candidate in late-stage trials so far. The firms submitted an application with the US FDA on Friday for Emergency Use Authorization of the vaccine.

Pfizer’s news followed on from Monday’s announcement by US biotech firm Moderna Inc that preliminary data from a continuing phase three study of its experimental COVID-19 vaccine showed it to be 94.5 percent effective.

And scientists at the University of Oxford who are developing a COVID-19 vaccine with drugmaker Astra Zeneca said they expect to report results from their late-stage trials before Christmas.

The encouraging milestones in the race for a vaccine come as global cases of the virus surpassed 57 million and global deaths surged to more than 1.3 million, according to Johns Hopkins University’s Coronavirus Research Center.

Despite the positive vaccine news, the global economy is not out of the woods yet when it comes to recovering from the pandemic. The crisis is expected to leave global GDP more than 6 percentage points below pre-pandemic projections for 2021, the International Monetary Fund warned ahead of the 2020 G20 summit. Ouch.

In response, the fund’s managing director, Kristalina Georgieva, called for strong, unified government action to stave off the worst of the economic fallout, especially for developing countries.

And that means working together, she said, warning that an “unsynchronised approach” to the global recovery would lead to just under 1.2 percent in global GDP growth by 2025, compared with 2 percent if countries were to work together. So for all you world leaders out there, it is time to play nice.

“They’ve drunk us out of house and home. We are getting the highest prices we’ve ever had thanks to China,” David Harris, CEO of South Australia Wine Group, a wine trading and services company, told Al Jazeera.

But the party may be grinding to a halt. Ongoing political tensions over Australia’s ban on Chinese company Huawei’s 5G network in the country and queries about Beijing’s handling of the coronavirus outbreak have made things tense.

Those sour political grapes have led to a massive hangover when it comes to trade, and experts warn any Chinese embargo on Australian exports could come at a hefty price. About a third of Australia’s total exports are now destined for Chinese shores, a market valued at approximately $111bn.

Children under the age of eight now watch an average of 39 minutes of online videos per day, double what they did in 2017, according to Common Sense Media’s 2020 census.

And those early childhood videos contain a lot of advertisements: more than half contained up to two ads, while a third contained three or more ads – and 20 percent of those commercials were peddling products not suited for pre-schoolers, like lingerie, whiskey and violent video games, according to a joint study by Common Sense Media and researchers at the University of Michigan.

The study’s authors recommended YouTube migrate all content directed at children from its main site to YouTube Kids “to ensure that ads are age-appropriate, and parents have more control over how to curate their child’s feed”.

The number of tiny owls found in the Rockefeller Center’s famous 75-foot-tall Christmas tree as it was being set up in New York City. The little stowaway had hitched a ride in the towering Norway spruce from a tree farm in Oneonta, New York, all the way to the big city.

While he’s a little bummed his big city vacation is over, we’re happy to report Rockefeller the Owl has been given a clean bill of health thanks to the efforts of Ravensbeard Wildlife Center and our staff! ⁣ pic.twitter.com/rN4uG0Iq5X

When a worker discovered the owl, his wife called the Ravensbeard Wildlife Center, who met her and picked it up. The plucky little bird was identified as a Northern Saw-whet, the smallest breed found in the Northeastern US.

Quickly nicknamed Rockefeller, the owl has been given plenty of fluids, a buffet of mice and x-rays to check he is okay before he’s “released to continue on his wild and wonderful journey,” the centre said. Now he’s got something to write home about.