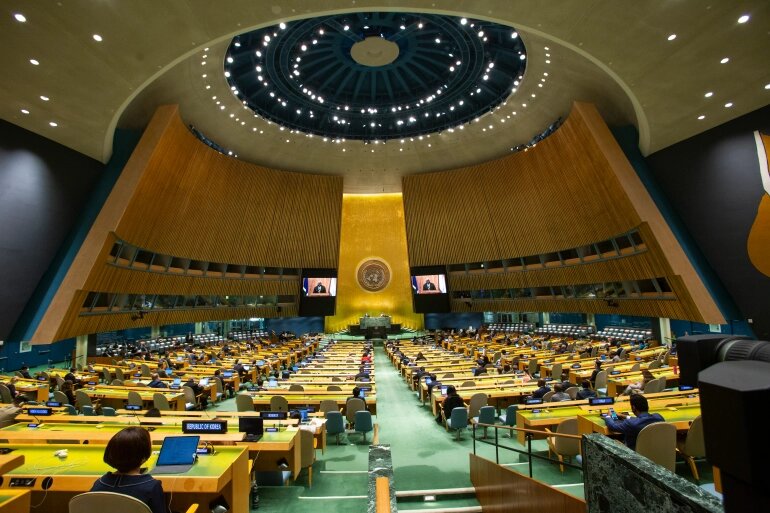 Decades of global effort to improve the health of women, children and adolescents and reduce gender inequity are being rolled back by a triple threat from conflict, climate change and COVID-19.

Taking place alongside the 77th United Nations General Assembly (UNGA) in New York, tomorrow’s annual PMNCH Accountability Breakfast will highlight the need for urgent, targeted investment in programmes and policies to tackle the devastating social and economic impact of these crises on the health and wellbeing of vulnerable women, children and adolescents.

“It is clearer now than ever that collaboration is key to improving accountability,” said the Rt Hon Helen Clark, PMNCH Board Chair and former Prime Minister of New Zealand.

“It is essential for citizens to be heard at the highest levels of government and leadership. Leaders need to understand what people want, and to play their part as champions in creating robust and responsive health systems and communities.”

The Accountability Breakfast is organized by PMNCH, the world’s largest alliance for women’s, children’s and adolescents’ health, and co-hosted by Every Woman Every Child Latin America and Caribbean (EWEC LAC), with a special focus this year on Latin America and the Caribbean (LAC), including adolescent health and wellbeing issues. The issues being explored and lessons to be learned apply across the world, however, including in West Africa.

Delegates from governments, NGOs, civil society, health professionals and youth organisations will explore key issues affecting women, children and adolescents. EWEC LAC will share findings from its new report, No Time to Lose: Health Challenges for Adolescents in Latin America and the Caribbean. The report focuses on adolescents as a population in transition and in need of timely support before they reach adulthood. Decisions made during this life stage, such as pregnancy, sexual health, substance use and school completion, will often determine the rest of their lives.

Over the past two decades a concerted global effort has improved the lives of millions of women, children and adolescents. The proportion of girls being educated globally, for example, rose from 73 percent in 1995 to 89 percent by 2020; the number of child brides reduced by 15 percent over the last decade, averting an estimated 25 million marriages; and there were three million fewer teen births per year since 2000. These gains, and many more, are now being undermined by COVID-19, climate change and conflict.

Data from WHO and UNICEF shows that in 2021 alone, 25 million children did not receive the basic vaccine against diphtheria, tetanus, and pertussis, a marker for immunization coverage in general. This represents the largest sustained drop-in rates of routine childhood vaccinations in a generation, potentially wiping out 30 years of progress. In 2022, 274 million people will need humanitarian assistance and protection. This number is a significant increase from 235 million people a year ago, which was already the highest figure in decades.

West and Central Africa has one of Africa’s largest displaced populations, with some 5.6 million internally displaced, 1.3 million refugees, 1.4 million returnees who still need assistance, and 1.6 million Stateless. In the Sahel region, armed conflict and attacks on civilians have displaced nearly three million people, nearly one million since January 2019.

Burkina Faso, for example, has experienced a convergence of crises, including inter-ethnic violence, armed conflict, poverty, inequalities, food insecurity, and environmental change. As a result, over 1.4 million people have fled their homes in search of safety leading to one of the fastest-growing displacement and protection crises globally. The instability has also created cross-border movements.

COVID-19 has led to food price hikes and overall increased cost-of living in many countries in East, Central and West Africa and other regions have been limiting accessibility to food and other essentials (even if food is available at increased prices in local markets). Fragile regions with already high poverty rates and precarious economic structures have been hit much harder than others because of the pandemic.

As a consequence of climate change, newborns in Mali are likely to witness 9.9 times more crop failures during their lifetime than what their elders experienced. While stunting rates in Mali have steadily decreased by 36 percent since 2000, the nutritional situation of populations and notably of newborns and young children is threatened by climate change.

The EWEC-LAC report finds that while LAC countries have made great strides in recent decades to improve health systems, inequalities still exist. Despite the introduction of more progressive sexual and reproductive health and rights (SRHR) policies and gains in service delivery, 24 million women in LAC have an unmet need for modern contraception, while the adolescent birth rate is the second highest in the world, after sub-Saharan Africa.

Collectively, the Americas are among the hardest hit by the COVID-19 pandemic, with over 7.1 million cases and 1.7 million deaths as of June 2022, representing 25 percent of total global infections but less than eight percent of the global population. LAC adolescents have also been disproportionately affected. The region has the world’s longest uninterrupted school closures due to COVID-19 mitigation measures, with over 165 million students out-of-school.

Adolescents in LAC are incredibly vulnerable to violence and mental health issues. The region has the highest homicide rate in the world, with young men (15 to 29 years old) in Central America killed at four times the global average. A large proportion of homicides are linked to locally and transnationally organized crime and gangs which, combined with poverty, has led many families across the region to flee their homes and seek safety in other countries.

Worldwide, there are now around 470,000 refugees and asylum-seekers from the Central American ‘Northern Triangle’ of El Salvador, Guatemala and Honduras alone, an increase of 33 percent as compared to 2018. Early marriage is much more prevalent in the Northern Triangle than in other countries in LAC. In Guatemala, the rate is 30 percent and in Honduras 34 percent compared to 12 percent across the LAC region overall.

LAC has been disproportionately affected by climate change and natural disasters. Over the past 50 years, Latin America has experienced 4,500 natural disasters that have led to the deaths of 600,000 people and injury to three million. The Intergovernmental Panel on Climate Change (IPCC) estimates that, by 2050, there could be up to 17 million internal climate migrants in Latin America.

“Children and teens across our region are at risk of becoming the generation that missed out on the health, education and economic opportunities that they needed to reach their fullest potential,” said Dr Carissa Etienne, Director of the Pan American Health Organisation (PAHO) “It is clear that we must act now to protect the future of our region. And we know how.”

“Latin America and the Caribbean have made remarkable progress in recent decades to reduce childhood mortality and to expand access to health services. We must therefore lean on these past experiences and re-focus our efforts as we rebuild from this pandemic.”

Delegates at the PMNCH Accountability Breakfast on 22 September will call on LAC governments to take immediate action. They will call for the rapid implementation of pandemic response and recovery plans to restore health services to pre-pandemic levels, and to invest in sustainable financing and comprehensive, evidence-based and equitable programmes, policies and services to improve health outcomes among adolescents and their families, particularly those most vulnerable. Increased investment in universal health coverage (UHC), linked with social protection services, will support more cohesive and peaceful societies.

“Latin America and the Caribbean is a region disproportionately affected by the impacts of COVID-19, in addition to new and ongoing conflict, persistent violence and ever-growing concerns around climate change. We must increase the funding of programs that are tailored to the people who need them most, particularly addressing the challenges adolescents are experiencing in the region including mental health, adolescent pregnancy and access to education. This is the urgent work we must commit to today, so that we can, in fact, celebrate progress in the future,” said H.E. Kersti Kaljulaid, the UN Secretary General’s Global Advocate for Every Woman, Every Child, former President of Estonia. “I am calling for more accountability, and more proof that women, children and adolescents are the priority of governments and organizations.”